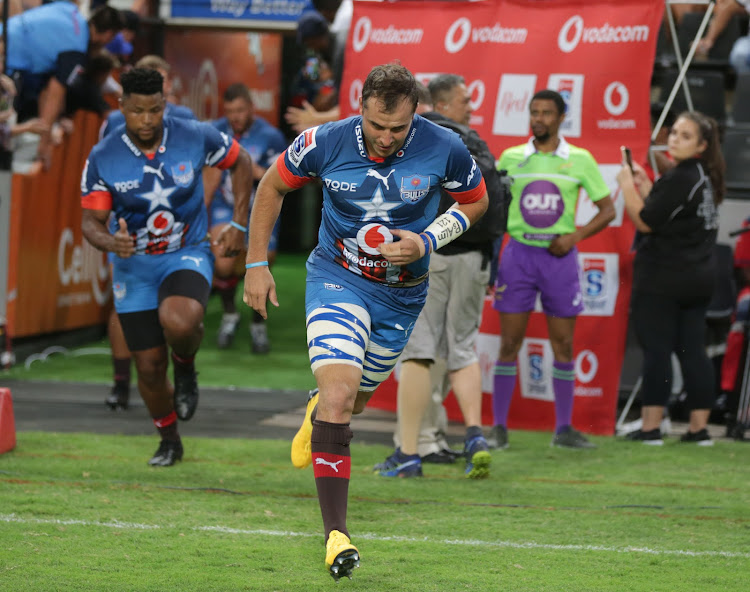 Burger Odendaal is hoping to become the first Vodacom Bulls captain in more than a decade to lead the team to Super Rugby glory.
Image: Samuel Shivambu/BackpagePix

Following their defeats to the Sharks and the Stormers‚ Bulls coach Pote Human has challenged his players to change their mindset when they host the Blues in their Super Rugby clash at Loftus on Saturday.

The Bulls started their campaign with two losses to the Sharks (23-15) in Durban and the Stormers (13-0) in Cape Town before they got a bye last weekend and Human wants them to get their campaign on track.

“It’s just the mindset‚ we need a mindset shift‚” he said on Wednesday when announcing the squad to take on the Blues‚ which included Jaco Visagie and Johnny Kotze who will run out for their 50th Super Rugby caps.

“We want to score tries because that’s why we play the game and I hope we achieve that this weekend.”

Asked how they got it wrong against the Sharks and the Stormers‚ Human pointed to the attack as the reason.

“I just think we didn’t use our opportunities‚" he said.

"Against the Sharks we were in the game and could have won it.

"And against the Stormers‚ I really thought that we played very well and again opportunities were there but we didn’t convert.

"This is something that bothers the whole team but we have worked on those things and hopefully it comes off this weekend.

“After those two loses away from home‚ we have worked hard on our attack.

"We are looking forward to Saturday and hopefully it will not rain because at the moment the forecast looks like there is going to be rain but we will see.

"I am happy with where the players are‚ they are very confident and looking forward to the game.”

Captain Burger Odendaal said they have to take full advantage of the fact that they have successive matches at Loftus against the Blues‚ the Jaguares and the Highlanders in the coming weeks.

“From the rest of the team‚ we are excited to be back at Loftus and it is vital that we must get points at home.

"We didn’t get anything in the opening two games away from home and that has put us a little bit behind and under some pressure.

"We definitely need to get four or five points in this game against the Blues‚” said Odendaal.

Morné Steyn will once again start at number 10 but Human said highly-rated Mannie Libbok will get a chance in the second half as he continues to learn from the vastly experienced former Springbok.

“Morne is still playing at ten and if the rain comes we may use him a little bit longer‚ but we want to give Mannie more game time because he can open the game up more in the second half.”

With two defeats from their first three Super Rugby games‚ the Lions will go into their bye week with much to ponder.
Sport
2 years ago

'He deserved it more,' says boy who gave medal to injured rival

An 11-year-old boy from Mpumalanga offered a touching example of selflessness when he gave away his winner's medal to a boy who he believed “deserved ...
News
2 years ago
Next Article