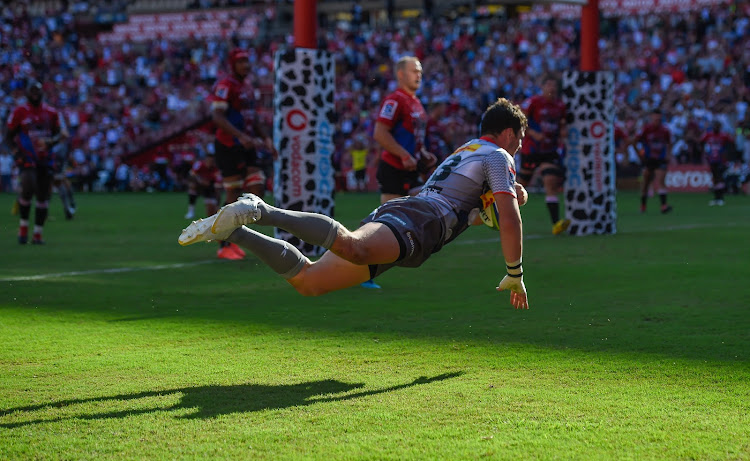 Ruhan Nel scored a try after the hooter to stun the Lions in Johannesburg.
Image: Christiaan Kotze/BackpagePix

With two defeats from their first three Super Rugby games‚ the Lions will go into their bye week with much to ponder.

Their latest setback arrived in the form of a heartbreaking 33-30 defeat to the Stormers at Ellis Park but they will take some comfort from that loss.

Twice the Lions had to pick themselves up from the canvass against the much fancied Stormers and even played themselves into a position to snatch an unlikely victory when they overturned a 15-26 deficit into a 30-26 lead with three minutes to go.

But a Ruhan Nel try after the hooter jolted them back to reality.

“So close‚ yet so far‚” said Van Rooyen about the narrow defeat.

“It was courageous how the guys fought back. I’m proud of them and the effort. But that’s rugby and the small margin‚ which is the difference between winning and losing.

“That said‚ we made a few errors and we have lots of work to do before our next game. Luckily we have a bye next week.

“The guys are gutted‚ but the fire is burning inside‚ and it can only get brighter ... and that’s encouraging for us.”

Although victory was snatched away from the Lions at the death‚ it was their sins earlier in the game that perhaps provided the Stormers the building blocks to the win.

Again the Lions’ scrum was stuck in reverse‚ their line-outs were wonky and the Stormers made some crucial turnovers at the breakdown.

Van Rooyen’s players will have Monday and Tuesday to lick their wounds before reassembling in preparation for their tour Down Under.

Their work in the setpieces will clearly require some revision this week before they fly out to Sydney on Saturday.

The Lions play the Waratahs on Friday‚ before going on to Melbourne‚ Auckland and Dunedin for the remainder of their tour.

The Stormers may be the only unbeaten South African side in Super Rugby but they are not nearly playing to their capacity.
Sport
1 year ago