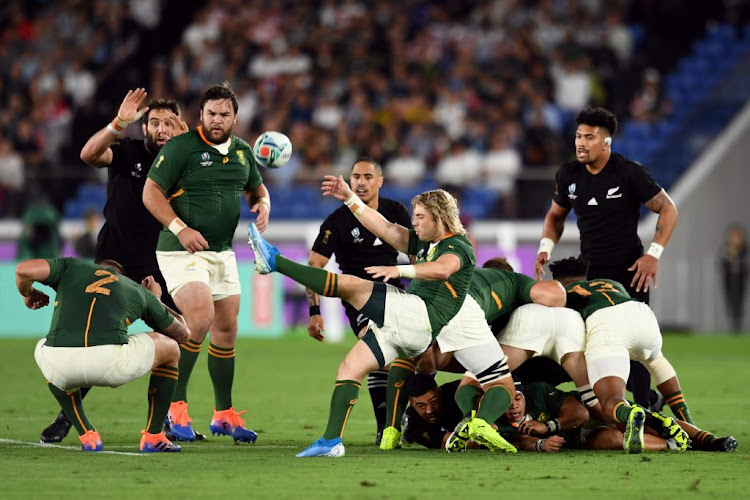 News of the All Black’s demise has been greatly exaggerated after they answered critics with a clinical 23-13 win over the Springboks in their Rugby World Cup 2019 opener in Yokohama on Saturday.

The contest was a lot tighter than the 10-point winning margin suggested.

The Boks were beaten but far from bowed.

On this evidence and from displays earlier in the year‚ no side is going to enjoy meeting either of these teams in the latter stages of the tournament.

The All Blacks’ credentials as RWC favourites were challenged after a record loss to Australia in Perth and their failure to beat the Springboks in Wellington earlier this year.

That is well behind them now.

The Boks were punished for their mistakes as New Zealand did what New Zealand do – scored against the run of play with the merest whiff of a chance.

The All Blacks scored 17 points in six minutes between the 23rd and 28th minutes from tries by wing George Bridge and lock Scott Barrett and points from the boot of flyhalf Richie Mo’unga.

Both tries came from Bok errors when failing to control two contestable kicks.

The All Blacks were as callous as always in punishing mistakes‚ which was the only difference in the final analysis and All Black skipper Kieran Read conceded as much after the game.

Unlike four years ago when the Boks lost their opening match to Japan in Brighton‚ this was a contest where defeat was always a realistic outcome.

In the bigger picture at RWC 2019‚ nothing much has changed for the Springboks because qualification for the knockout stages will still hinge on beating Namibia‚ Canada and Italy.

And on the evidence of this contest‚ there is still almost nothing to choose between the Boks and the reigning world champions.

NZ were more ruthless and held their nerve better than SA when under pressure. The Boks will have to make history now if they go on to win RWC 2019 because no side has ever won the tournament after losing a pool match.

But this was also the first time the Boks and All Blacks have clashed in the pool stages of the tournament.

Coach Rassie Erasmus will have some pondering to do though‚ because his conservative game plan of tactical kicking and territorial dominance didn’t pay off on the scoreboard.

But in theory it worked because the All Blacks were under immense pressure for the long periods and Boks’ shortcomings were in their execution.

Scrumhalf Faf de Klerk was brilliant at times‚ he sniped and created some problems and his aggressive reading of New Zealand’s attack led to some good defensive plays.

But often his service was poor and too many times looped or inaccurate passes stopped any attacking momentum the Boks created.

Occasionally it also led to a complete reversal of pressure as NZ harassed scrambling Bok defenders forced to mop up an errant pass.

The Boks will also have to rethink rolling mauls from line-outs because the All Blacks stifled any momentum they tried to build from that base.

There probably aren’t any better than All Black lock Sam Whitelock in organising maul defence‚ but even so‚ the Boks have to be better.

French referee Jerome Garces‚ like so many before him‚ allowed the All Blacks tremendous leeway on the offside line‚ which was a big factor in stunting the Boks’ attacking momentum.

It was frustrating but not unexpected.

The Bok scrum also failed to dominate and again‚ there were some questionable decisions in the early exchanges when it appeared Joe Moody was buckling under pressure from Bok tighthead Frans Malherbe.

The Boks received no benefits.

Individually wing Cheslin Kolbe was sublime‚ his ability to find space with his magical feet‚ remarkable acceleration and ability to change direction in a blink was the source of the Boks’ best attacks.

Flank Pieter-Steph du Toit‚ who went down clutching a knee midway through the second half before soldiering on‚ was tireless again and his good health is vital to the Boks’ campaign.

Flyhalf Handré Pollard had a mixed game‚ which included missing one easy kick almost directly in front‚ while Duane Vermeulen redeemed himself in the second half after an unusually untidy first 40 minutes.

The outcome was disappointing for South Africa but the overall performance was very good.

It was a strange outcome in that the Boks lost by 10 points but could just as easily have won.

No players embarrassed themselves and the Boks showed grit to ‘win’ the second half 10-6.

On the basis of this encounter‚ there is room for improvement and reason to feel optimistic.

A return match at the same venue against the All Blacks for the World Cup final on November 2 is still a very real possibility.