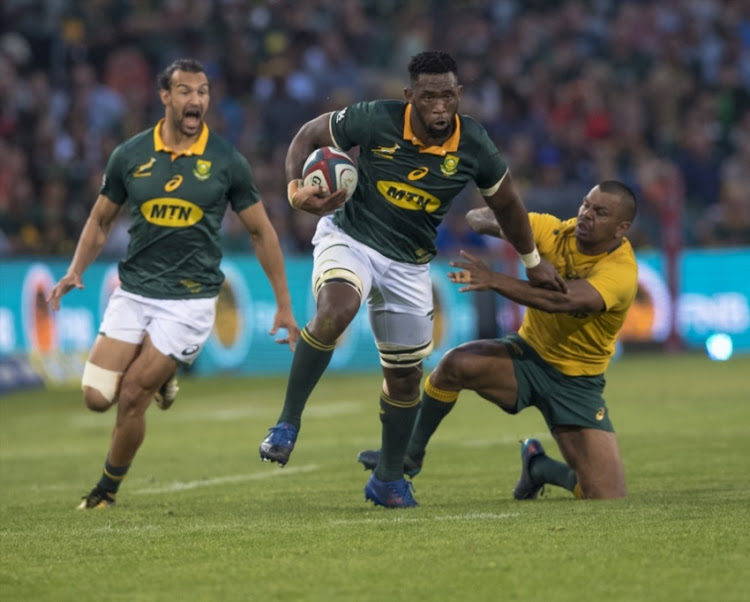 Siya Kolisi of the Springboks during the Rugby Championship 2017 match between South Africa and Australia at Toyota Stadium on September 30, 2017 in Bloemfontein, South Africa.
Image: Johan Pretorius/Gallo Images

Former skippers Warren Whiteley and Eben Etzebeth are also included while there is a recall for veteran openside Francois Louw.

Also returning to the Springbok squad are hooker Malcolm Marx‚ Lwazi Mvovo (outside back)‚ as well Lionel Mapoe (centre) and Ross Cronje (scrumhalf)‚ both of whom missed the midyear Tests because of injury.

Louw has represented the Boks in 57 Tests and Erasmus said he will add a lot of experience to the group.

“Eben and Warren have been out of the Bok mix for a while because of injury so it’s very pleasing to have them back in the squad‚ while Malcolm has regained his good form with the Emirates Lions since recovering from his injury‚” said Erasmus‚ who added that the participation of Brink and Jean-Luc Preez (loose forward) is dependent on medical examinations.

“We saw the benefit and impact of Willie le Roux and Faf de Klerk in the squad during the June internationals and I want ‘Flo’ to perform a similar role for us.

“It is also pleasing to again add some young players who been showing good form and consistency for their franchise teams during Vodacom Super Rugby‚” Erasmus added‚ in reference to the uncapped trio of Willemse‚ Van Staden and Brink.

Siya Kolisi retains the captaincy‚ while Le Roux (fullback‚ Wasps) and De Klerk (scrumhalf‚ Sale Sharks)‚ both of whom were outstanding during the 2-1 Series win over England in June‚ are amongst the 15 backs in the squad.

The bulk of the players have been training in Stellenbosch for a few weeks‚ with the Lions contingent set to join them on Wednesday.

The men from Johannesburg returned to South Africa on Monday after their Super Rugby final appearance on Saturday against the Crusaders in Christchurch.

The squad will continue with preparations in Cape Town until Friday and following a two-day break will then reassemble in Durban next Sunday to continue with their build-up towards the Rugby Championship opener on 18 August against Argentina at Kings Park.

The two sides meet again a week later in Mendoza. Players who were not considered because of injury include Damian de Allende (Stormers)‚ Warrick Gelant‚ Lood de Jager‚ Trevor Nyakane (all Bulls)‚ Coenie Oosthuizen and Sbu Nkosi (both Sharks).