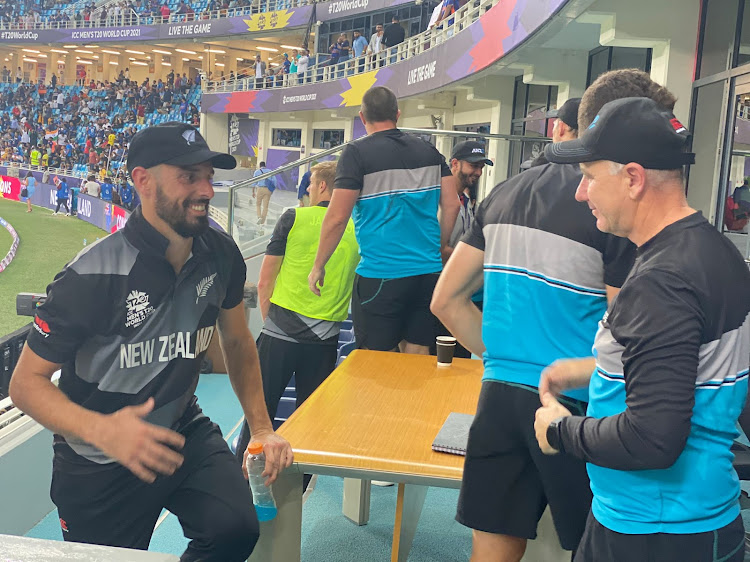 The New Zealand dressing room was full of smiles after the win over India.
Image: @BLACKCAPS/Twitter

New Zealand coach Gary Stead said his bowlers produced one of their best ever T20 performances in Sunday's eight-wicket victory over India, which put the 'Black Caps' firmly back on track for a place in the World Cup semi-finals.

After losing their tournament opener to Group II leaders Pakistan, New Zealand restricted India's lauded batting line-up to 110 for seven before rattling off their victory target with more than five overs to spare.

Seamer Trent Boult took 3-20 and spinners Ish Sodhi (2-17) and Mitchell Santner (0-15) exerted huge pressure on the Indian batsmen in a highly disciplined display of bowling at the Dubai International Stadium.

"I thought the bowling effort was absolutely outstanding, possibly up there with the best performance I've seen in my time with the T20 bowling team," Stead told reporters from the United Arab Emirates.

The victory transformed New Zealand's hopes of securing one of the two semi-final spots from the group ahead of their final three Super 12 matches against Scotland, Namibia and Afghanistan.

"It's hard to say if it was 'must win' or not because it's pretty early in the tournament," Stead added.

"But you would imagine the way the group is structured that it's going to be very difficult for the team that didn't win to get through to the semi-finals."

Stead said they would not be taking any of their last three opponents lightly and would be looking to improve their net run rate, which acts as a decider in the case of ties in the standings, wherever possible.

"Afghanistan have got a big lead on everyone at the moment, but we'll just have to see how the next two games play out before we play Afghanistan," he said.

"But, at the end of the day, if we win all three games, it is in our hands, and that's certainly our goal."