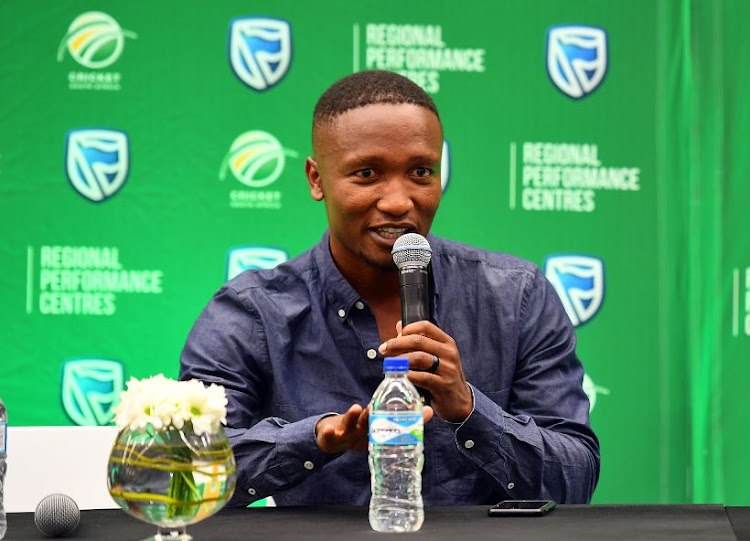 Former player Omphile Ramela is taking the Cricket South Africa interim board to court to challenge his removal as a director.
Image: Johan Rynners/Gallo Images

Former Cricket South Africa (CSA) interim board member Omphile Ramela has pleaded with Sports Minister Nathi Mthethwa not to intervene in a meeting called by the SA Sports Confederation and Olympic Committee (Sascoc) with CSA on amendments to the cricket body’s constitution.

After the CSA members’ council‚ its high decision-making authority‚ had acceded to the demands of the interim board appointed by Mthethwa for a majority independent board‚ Sascoc asked to meet CSA on an unscheduled date.

The sports mother body wants to understand first-hand the proposed amendments to CSA’s memorandum of incorporation (MOI)‚ which serves as its constitution‚ to allow for a majority independent board and a chairperson with no affiliation to cricket.

Mthethwa apparently caught wind of the meeting and wrote to Sascoc to call it off.

TimesLIVE has learned that the minister allegedly told Sascoc that cricket was not an Olympic sport and therefore it was accountable to the International Cricket Council (ICC)‚ not to Sascoc.

He further told Sascoc that the process he was undertaking at CSA was in line with the powers bestowed on him by section 13 of the National Sport and Recreation Act. A source said Mthethwa decreed that no other party except his office could discuss CSA matters.

“When the minister heard that Sascoc needed to review any member affiliate MOI prior to amendments being adopted‚ he wrote to Sascoc threatening them‚” said the source. “The minister wants to use a forced victory at CSA for political points. He instructed the CSA interim board to bypass all governance documents to achieve his goals.

“So the members are being forced not to apply the MOI provisions for the notice period for a special general meeting‚ which is 21 days as per their MOI.”

A CSA special general meeting (SGM) was scheduled for Saturday from 3pm where the members would require a 75% majority for the amendments to be passed.

TimesLIVE has been informed that CSA interim board chairperson Dr Stavros Nicolaou asked the 14 affiliate presidents who form the members’ council to vote before the start of the meeting in favour of waiving the notice period.

Ramela – a former cricketer and players’ union president appointed by Mthethwa to the CSA interim board in October last year‚ before he was removed again by fellow directors in December – apparently found out about the minister’s letter to Sascoc and implored Mthethwa to withdraw it.

“Mhlonishwa [Excellency]‚ a letter has been urgently brought to my attention by the cricket community concerned about the assertions made in the attached letter presumably by yourself and the possible consequences thereof‚” Ramela wrote to Mthethwa‚ adding he would “only engage the contents of this letter in relation to the constitutional effect‚ thus the current legal standing of CSA since the submission of this letter”.

He wrote: “If I read the National Sports and Recreation Act 110 of 1998‚ the National Sport and Recreation Amendment Act No 18 of 2007 and the constitution of Sascoc‚ based on your assertions in this letter [to Sascoc] it is my understanding and interpretation of the law that the honourable minister has officially stripped CSA of its Proteas colours and its legislative nature as a national sport federation.”

Ramela argued that CSA was a national sport federation and therefore administratively accountable to Sascoc‚ which acted as a controlling body of SA sports in accordance with the Acts he had cited‚ adding that Sascoc’s mandate was not limited to the Olympics.

He wrote: “To say CSA’s primary relationship is with the ICC‚ not [with] Sascoc‚ is to denounce the legislative authority of Sascoc over CSA‚ and such an assertion can be exploited against the national interest of the game.”

Ramela said there was no room for filters in the application of the law.

“The game of cricket has [had]‚ and continues to have‚ severe challenges administratively. However‚ despite the good intentions of the honourable minister in fixing the game of cricket‚ there is no room to do so outside the ambits of the law.

“It was through a consented effort that the honourable minister intervened and appointed an interim board. This consent by the members’ council did not give the interim board nor the minister the legislative authority to replace Sascoc.

“I implore the honourable minister to retract this letter‚ which seems to give a blank cheque to CSA to operate as a national sport federation under the national colours yet indemnified from the legislative mandate‚ thus accountability‚ of the organisation.”

Mthethwa’s spokesperson Masechaba Khumalo‚ asked for a response from the minister‚ confirmed Mthethwa had received the letter from Ramela.

“We have received the letter and will respond in due course‚” said Khumalo on Saturday.

Reached for comment‚ Sascoc president Barry Hendricks claimed the minister has not stopped them from meeting with the CSA members council.

“The minister has not stopped us from meeting with the members council. What the minister did was to say we should not be involved with the work of the interim board‚” Hendricks told TimesLIVE.

“We are well within our rights as Sascoc to meet with CSA as our member. So the meeting will happen. We want to advise CSA as our member to make sure that they follow proper procedures in this process.”