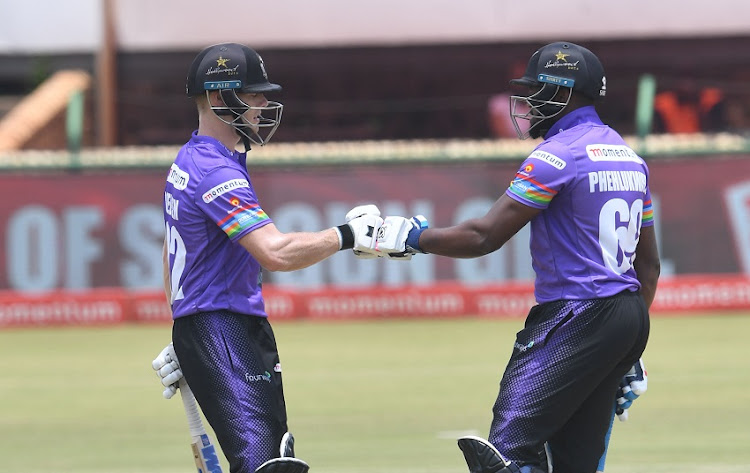 Grant Roelofsen of the Dolphins celebrates his 50 runs with Andile Phehlukwayo of the Dolphins during the Momentum One-Day Cup match between Momentum Multiply Titans and Hollywoodbets Dolphins at Senwes Park on January 09, 2021 in Potchefstroom, South Africa.
Image: Lee Warren/Gallo Images

The Dolphins beat the Titans by 76 runs during their Pool A Momentum One Day encounter that was played at Senwes Park in Potchefstroom on Saturday.

In what the first match of the competition, that is being played in a bio-bubble in Potch, Titans captain Grant Thomson won the toss and asked the opposition to bat first.

The Dolphins scored 272/7 in their allotted 50 overs but it proved to be too far t reach for the Titans who were left stranded on 196/8 after their top order batters falling cheaply.

The main destroyer with the ball for the Dolphins was Ruan de Swardt who returned with the three wickets of Theunis de Bruyn, Dayyaan Galiem and Junior Dala.

He was supported by Senuran Muthusamy who accounted for Rubin Hermann and Sibonelo Makhanya and Kerwin Mungroo who claimed the scalps of Neil Brand and Thomson while Robbie Frylinck got one.

Titans struggled largely because they could not put together partnerships and their top scorer was Theunis de Bruyn (36) and Thompson (27) on a day where most of their batters could not convert their starts.

For the Dolphins with the bat, Muthusamy top scored with an unbeaten 70 and he was followed by Grant Roelofsen on 65 with all-rounder Phehlukwayo contributing 51.

With ball in hand for the Titans, Dayyaan Galiem and Thando Ntini took two wickets apiece while Kyle Abbott, Junior Dala and Tabraiz Shamsi ended with one scalp each.

Galiem returned with the wickets of Marques Ackerman and Ruan de Swardt while the highly promising Ntini removed the experienced duo of David Miller and Robbie Frylinck.

Other contributions with the ball for the Titans were Dala, Shamsi and Abbott who accounted for the removals of Khaya Zondo, Grant Roelofsen and Andile Phehlukwayo.

On Sunday, the Dolphins will be against the Knights.