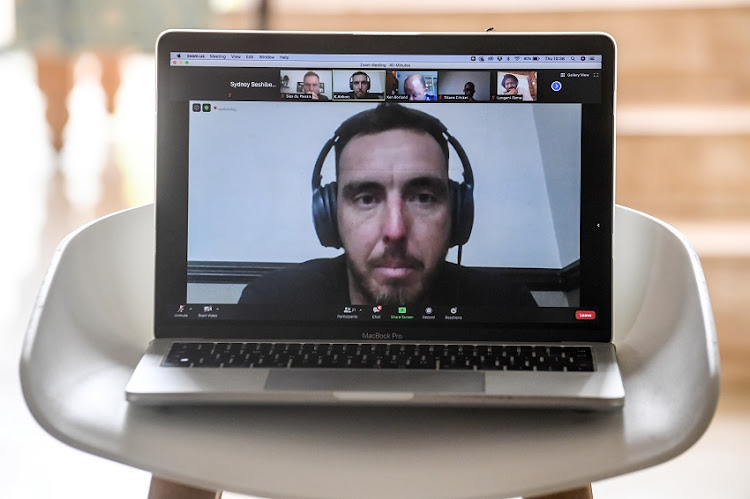 Kyle Abbott during a virtual press conference ahead of the Momentum One-Day Cup on January 07, 2021 in Johannesburg, South Africa.
Image: Sydney Seshibedi/Gallo Images

With the ICC men’s T20 World Cup in India looming in October‚ Kyle Abbott has said he has no immediate plans for a return to the Proteas fold after he became the first Kolpak player since Brexit to come back to South Africa to play domestically.

The 33-year-old Empangeni-born cricketer signed for the Titans on Wednesday for the remainder of the season in a move that makes the right-arm fast-medium bowler available for selection for the national team.

“To be quite honest‚ at the moment‚ it [the return to the national team] is not in my immediate view‚” said Abbott in his first interaction with the media after joining the Centurion franchise.

Abbott played hardly any form of cricket last year and admitted that he is finding it difficult to regain full sharpness.

“So at the moment my objective is to get back playing professionally and get back to that level [of fitness] that I was [a few years ago].

Not many reasons to be cheerful about MSL

It’s poorly timed‚ ill conceived‚ and a shocking waste of money‚ but‚ like it or not‚ it’s here: the second edition of the Mzansi Super League (MSL) ...
Sport
2 years ago

The Hampshire man arrived in Centurion on Monday and immediately put on his tracksuits for a couple of afternoon training sessions as the Titans prepared for the start of the Momentum One-Day Cup against his former team and defending champions the Dolphins.

“It’s been really good‚” Abbott said of his first couple of days at his new surroundings.

The One-Day Cup kicks off in Potchefstroom in a bio-secure bubble environment at Senwes Park. The Titans are in Pool A along with the Knights and the Dolphins.

“The way the guys went about their business [at training] was really impressive. The guys are in good spirits and everyone is ready to go‚ especially after the postponement of those couple of four-day games the guys are sort of itching to go again.”

Abbott shocked many South Africans in 2017 when he turned his back on his Proteas career by agreeing to join English County side Hampshire.

He said he understands why a lot of people were hurt by his Kolpak move as they were with the near 50 South Africans who have went the same route but has no regrets whatsoever.

“It’s been an issue for a very long time but I think people don’ realise that it is never an easy decision for many of us at the time having spoken to some of the Kolpaks.”

He said South African players who were on Kolpak deals got as much flak from back home as they did from the English fans.

Faf du Plessis duly delivered on debut for Kent‚ but he will need to do so again if his temporary employers are to get their money’s worth.
Sport
2 years ago

“I do understand where the people are coming from. It’s an emotional thing and it is a patriotic thing and I do get that but at the end of the day for most of us‚ myself definitely‚ it was purely a career move or a decision that I had to do make at the time and I don’t have any regrets about it.”

Abbott will return to Hampshire in March.

Dolphins coach Imraan Khan said his team enjoy the white ball formats and will be looking to defend a title they won in style last time out.

“From a preparation perspective things are slightly different given all our games are going to be on the Highveld as opposed to previous years where we would play all around the country‚” said Khan.