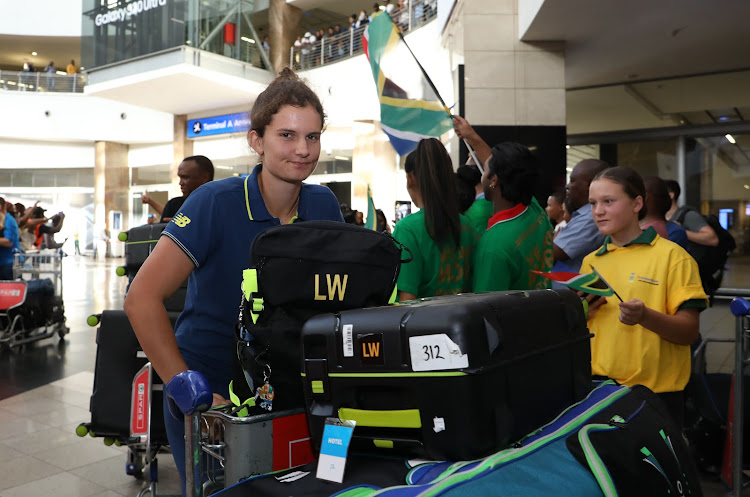 Laura Wolvaardt smiles as she arrives at the OR Tambo International Airport in Johannesburg from the Women's Twenty20 Cricket World Cup in Australia on March 7 2020 just before Covid-19 halted sport around the world.
Image: Muzi Ntombela/BackpagePix

With the Momentum Proteas needing 27 off the last 12 balls‚ and with the imposing Sydney Cricket Ground crowd rooting for the home side‚ Wolvaardt hit a gigantic six off the final ball of the penultimate over to leave her team needing 19 from the last over of the rain-interrupted match.

The Milnerton-born‚ Cape Town‚ youngster who has matured beyond her 21 years both on and off the field hit another boundary in the final over.

Wolvaardt inched SA to a position from which victory‚ rather than defeat‚ was possible‚ if not highly likely‚ but in the end the Momentum Proteas lost by five runs on the Duckworth-Lewis method with the right-hander carrying her bat on 41 from just 27 balls.

“I had many sleepless nights over that game‚” said the right-hander of the match that turned out to be the last for the women’s senior national side before world sport ground to a halt in March due to Covid-19.

“I think the fact that it was the last game before the lockdown actually did not help me because in the end‚ you know‚ we came so close‚” said the reigning queen of SA women’s cricket who also walked away with the Momentum Proteas ODI Cricketer of the Year and the SA Women’s Players’ Player of the Year gongs.

She said she has replayed that semifinal over and over again in her head during the Covid-19 lockdown and refuses to watch the match on television again.

“But I have not watched it on TV again. I don’t want to‚” she said with a chuckle.

“I have watched it a lot in my head.”

Wolvaardt is only 21 years of age but she has already been part of the Momentum Proteas setup for the last four years and still has World Cup tournaments to play.

“So I guess this kind of makes me a senior now‚ so I think that is pretty cool. I think it is not such a big thing because we (as a team) don’t see ourselves as seniors and juniors.

“We just kind of like play as a team.”