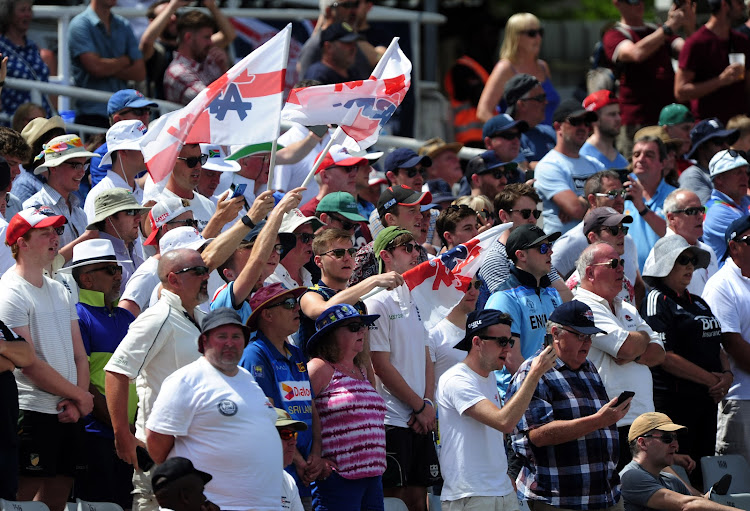 England fans, the Barmy Army, will grace the St Georges Park venue in Port Elizabeth for the first time since 2004.
Image: Ryan Wilkisky/BackpagePix

The St George's Park brass band has missed them dearly and they will be ready and waiting for them when the series resumes on Thursday with the third Test.

Since the England series was shortened from five Tests to four from the 2009/10 tour onwards‚ Durban has been preferred over Port Elizabeth.

The moving of the Boxing Day Test from Durban to Centurion has opened up a chance for South Africa's oldest Test ground to host England again.

The absence of England from Port Elizabeth has made the chairman of the St George's Park brass band Bernard Leander's heart grow fonder.

England won their last Test in Port Elizabeth by seven wickets; a Test that featured Dale Steyn and AB de Villiers as debutants against Michael Vaughn's strong side.

“We've been waiting for this moment‚ especially that it's a Test.

"We've had this build-up to those guys coming here because we haven't seen them in a long time. That means we have to do something special‚” Leander said.

“Sometimes‚ what you see on TV is not what you see happening at the stadium‚ so we try to have a balance between having fun and making sure that people are entertained.”

Such was the Barmy Army's dominance at Newlands during the New Year's Test that the Cape Town ground felt more like Edgbaston than Newlands‚ but with more sunshine and no stoppages for rain.

St George's Park has its own vibe and the band has always made the ground one to visit for international matches.

Leander said he was going to miss the first day's play‚ but hoped the two groups would provide a varied but exciting atmosphere to what will be a critical Test.

The series is square with South Africa having won the first Test by 107 runs at SuperSport Park in Centurion‚ while England responded with a 189-run win in Cape Town.

“There's been years when they've moved over to the band‚ but it's a big deal for us to have them here.

"Our main purpose though is to bring fun to the game‚ so we fraternise well with them. We're looking forward to seeing them‚” Leander said.

“I'm not going to be there on the first day‚ so I'll be there in spirit.”

Greater game awareness will be crucial to South Africa’s prospects in the Under-19 Cricket World Cup that starts on Friday.
Sport
2 years ago

Former Proteas batting superstar AB de Villiers has stated his intention to return to the national team‚ but said there's a lot that needs to happen ...
Sport
2 years ago

Proteas speedster Anrich Nortje says SA will wait for the right moment to “rev it up” against England’s Jos Buttler when the third Test gets underway ...
Sport
2 years ago
Next Article