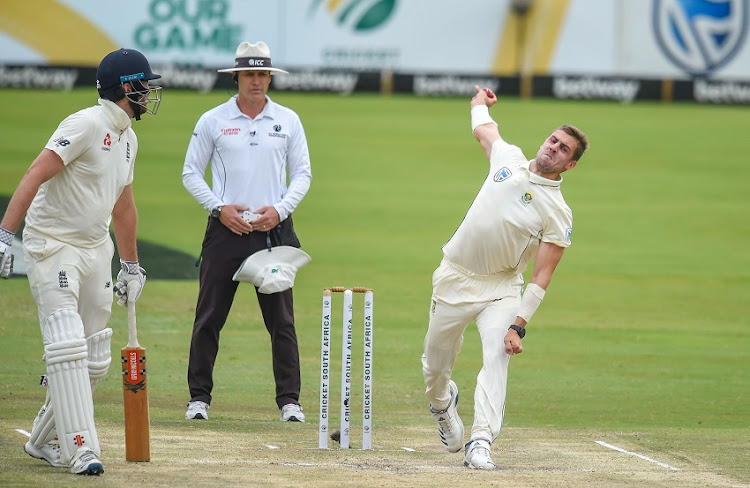 Proteas speedster Anrich Nortje says SA will wait for the right moment to “rev it up” against England’s Jos Buttler when the third Test gets underway at St George’s Park on Thursday.

Buttler was fined and slapped with a demerit point for calling SA allrounder Vernon Philander a “f**king kn**head” during the second Test won by England at Newlands last week.

Some fans and pundits and dismissed it as part of the game‚ others said Buttler‚ who this week apologised for his outburst‚ was out of order.

It seems the Proteas may be leaning towards the latter stance if Nortje’s comments on Tuesday were anything to go by.

“I definitely think it gets one or two guys going but we haven’t really spoken about it‚” said Uitenhage-born Nortje.

“It’s up to the umpires and whoever to sort out. It’s not really something you can say . . . on a stump mic as well.

"But‚ it definitely does get the blood flowing and once we identify a moment we’ll probably try and rev it up‚” said the Warriors spearhead.

Nortje is clearly quite comfortable with being handed the role of enforcer and will be out to further assert his credentials in his first home Test starting Thursday.

The 26-year-old has only played four Tests and in his most recent two‚ he provided the firepower for the home attack.

Following the retirement of Morne Morkel‚ the Proteas need someone to fulfil the aggressor role and Nortje has the means to do just that with his raw pace at 150km/h-plus.

"Just to be playing is already a big honour for me. Whatever the team needs or wants‚ whether it’s investment or whether it’s striking‚ I’m happy to do that for now.

“Sometimes I do that role domestically as well‚ so it’s nothing different for me. It’s about what the team needs.”

Nortje’s introduction into Test cricket would have been jarring for him.

One wicket for 179 runs in two Tests against India in Pune and Ranchi would not have been the kind of debut the speedster would have planned.

But Nortje did not dig a hole.

Instead‚ he was handed another opportunity and came out firing against the English at Centurion in more familiar conditions.

He picked up the big wickets of Ben Stokes‚ Joe Root‚ Rory Burns and Jonny Bairstow and then made an invaluable 40 with the bat as a nightwatchman in a 91-run stand with Rassie van der Dussen to underline his mental fortitude.

He was aggressive and fast and continued that in Cape Town.

He believes SA were not too far off the mark as a bowling unit at Newlands.

"We were quite happy with our performance in Centurion. It’s not really red flags for us at this stage. We’ve been doing the same work‚ the same intensity.

“Not picking up the 20 wickets‚ yes‚ it might be a bit of a concern but when we had the opportunity we kept the run rate down.

"When (Ben) Stokes and them started to go it was a bit of a different story.

"In general‚ we did the right things for long periods.

"It’s just a question of getting the extra one or two wickets to get to the tail.”

And what of his debut Test in Port Elizabeth?

“I used to sit here on the grass embankments and watch the games‚" he said.

"It’s been a lot of hard work over the years and a lot of sacrifices‚ a lot of Decembers in South Africa playing cricket rather than having holidays.

"It’s nice to finally get that opportunity and I’m really excited just to go out there and give it my best.”