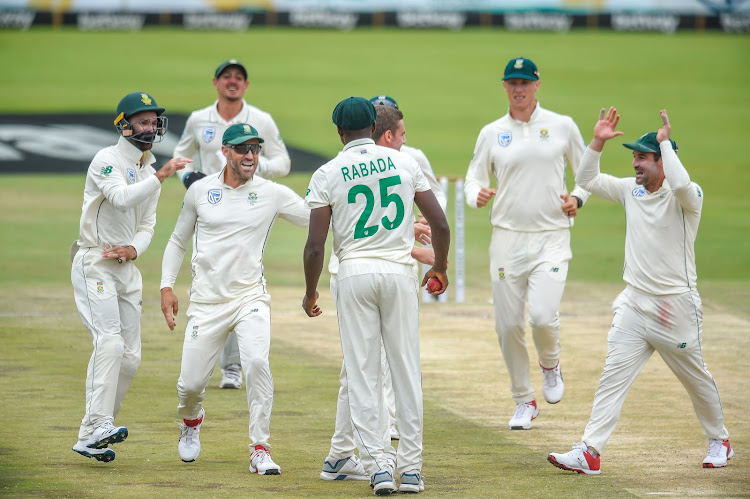 Kagiso Rabada of South Africa congratulates Anrich Nortje of South Africa for getting the wicket of Rory Burns batsman of England for 84 runs during day 4 of the first International Test Series 2019/20 game between South Africa and England at Supersport Park, Centurion on 29 December 2019.
Image: © Catherine Kotze/BackpagePix

Anrich Nortje and Dwaine Pretorius took two crucial wickets during the first session of day four of the Boxing Day Test in Centurion to leave England on 171/3 and still needing 205 runs to win.

England added 50 runs in the session to their overnight score of 121/1 in 25 overs as they struggled to find holes in the South African bowling attack of Kagiso Rabada‚ Vernon Philander‚ Nortje‚ Pretorius and Keshav Maharaj.

Nortje got the breakthrough when Burns‚ who was looking solid with a score of 84‚ top-edged the ball to short cover for Rabada to take a simple catch and deny the English opener a shot at his third Test century.

South African bowlers continued to put pressure and were duly rewarded later when Joe Denly joined Burns in the pavilion when he was trapped in front by Pretorius.

At the lunch break‚ skipper Joe Root and all-rounder Ben Stokes were rebuilding their innings with their partnership still on its infancy on 13 off 57 balls‚ and they have all to do in the second session if England are to prevail.

England started the day still trailing SA by 255 runs with Burns on 77 and Denly on 10‚ and with Dom Sibley (29) the only wicket to fall at the beginning of their second innings on Saturday.

Burns and Sibley got England’s innings to a solid start with a well-taken partnership of 92 as they managed to frustrate the Proteas bowlers in the third session of day three.