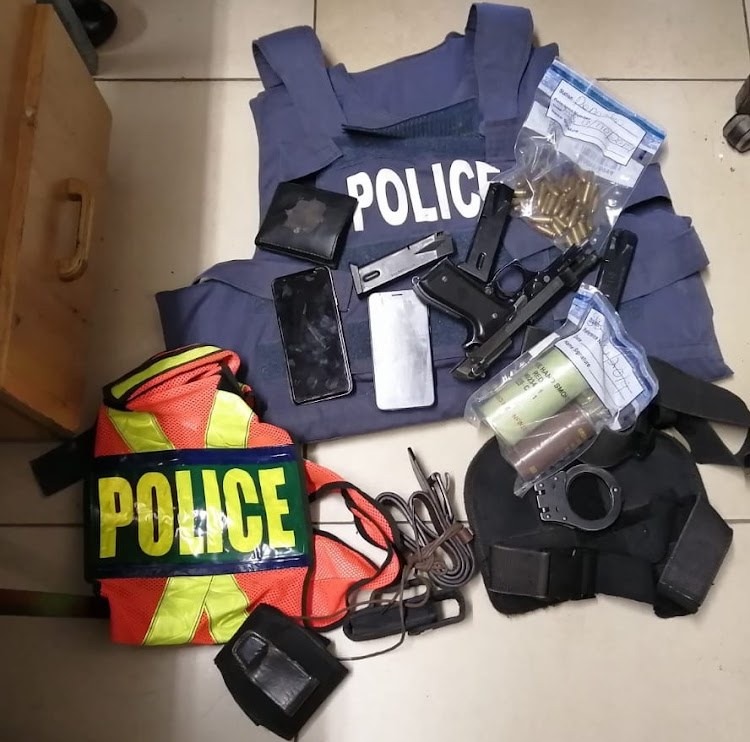 A routine roadblock led to the arrest of a suspect who had a variety of police items in his possession, including a gun stolen from a police station.
Image: SAPS

A suspect was caught with a stolen police firearm, police-issue handcuffs as well as a police reflector jacket and bulletproof vest on Saturday night.

The 28-year-old suspect also had two handgrenades and 43 9mm rounds of ammunition in his possession.

Brig Motlafela Mojapelo said he was apprehended at about 9pm during a festive season safety operation, jointly conducted by Groblersdal police and the traffic police along the Loskop/Ntwane road next to the Moutse magistrate's court, in Limpopo.

“The law enforcement officers conducting a roadblock in the area pulled over a white Volkswagen Polo driven by the suspect.”

A search of his vehicle led to the discovery of the items.

“The suspect, who initially resisted arrest, will be profiled to possibly link him with serious crimes that were committed in the area or elsewhere.”

Mojapelo said the firearm that was recovered was reported stolen at Dullstroom police station in Mpumalanga in June 2019.

The suspect will, in addition to the theft of a police firearm, face charges of impersonating a police officer, unlawful possession of a firearm and ammunition, SAPS bulletproof vest and resisting arrest.

Four suspects, three of whom are females, have been arrested in two separate incidents in the Johannesburg CBD for impersonating police officers.
News
3 years ago

A 24-year-old man hoodwinked the Mamelodi Hospital into accepting him to work as a student doctor while he did not have qualifications.
News
2 years ago
Next Article