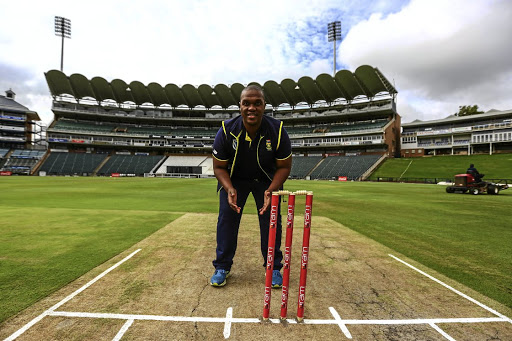 Linda Zondi is set for a return as convenor of selectors for the Proteas.
Image: File Photo

Linda Zondi is set to return as the Proteas' convenor of selectors, albeit on a temporary basis.

He'll be back in the hot seat for the four-Test Basil D'Oliviera Trophy series against England that starts on Boxing Day at SuperSport Park in Centurion.

When the home summer season is completed, South Africa will go to India for three ODI's, wrapping up the 2019/2020 season.

Zondi is the second person from the Ottis Gibson tenure to be roped in to help the national team.

Fielding coach Justin Ontong was part of the interim coaching staff for the India series under Enoch Nkwe's stewardship.

Rassie van der Dussen may be 30 years old and yet to finish a year in international cricket‚ but carries the air of a veteran.
Sport
2 years ago

Zondi though comes in with a wealth of selectorial knowledge, having served as a national Under-19 selector and convenor before moving up to the national team as a selector in July 2013.

He replaced former Proteas captain Andrew Hudson as the convenor of selectors in 2015 and performed his duties well in the four years he was in charge.

He blooded a number of promising youngsters and battled gamely against the retirement and Kolpak contract tide that collected a number of senior players along with some impatient fringe players who couldn't wait their turn.

Zondi's copybook was blotted this year by the historic 2-0 Test series reverse against Sri Lanka earlier this year and the equally, if not even more disappointing Cricket World Cup campaign where South Africa were booted out at the group stages before the tournament had even taken shape.

Zondi will be unveiled alongside new team director Mark Boucher, who will also be operating in an interim capacity as Cricket South Africa aims to arrest the flagging fortunes of the organisation on and off the field.

Zondi, Boucher and temporary director of cricket Graeme Smith will have to help the national team get back onto its feet after a difficult 2019.

While the T20 team held its ground against India, the Test side is on a run of five consecutive losses dating back from February against Sri Lanka and three hidings against India in October.

Former Proteas captain Graeme Smith was finally confirmed as Cricket South Africa's director of cricket on Wednesday afternoon but will assume the ...
Sport
1 year ago

Cricket SA have begun the attempt to win back the public's trust and consultant Dave Richardson says bringing Graeme Smith on board as Director of ...
Sport
1 year ago
Next Article