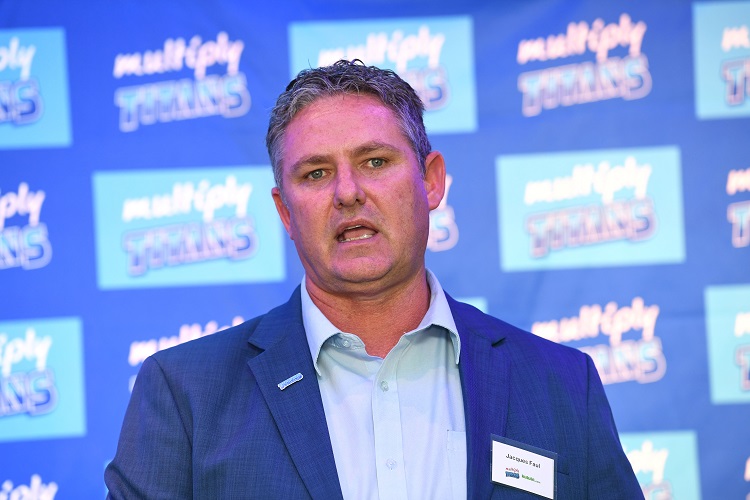 Cricket South Africa decided to appoint administrator Jacques Faul at a special board meeting on Saturday after a chaotic week in which they suspended CEO Thabang Moroe.
Image: Lee Warren / Gallo Images

Cricket South Africa (CSA) have appointed administrator Jacques Faul as acting chief executive and hope to conclude negotiations with former test captain Graeme Smith to take over as director of cricket next week, the governing body said on Saturday.

The CSA decided to appoint Faul at a special board meeting on Saturday after a chaotic week in which they suspended CEO Thabang Moroe over governance concerns, had three board members resign and lost key sponsor Standard Bank, who will not renew their contract when it ends in April 2020.

"Jacques Faul did not hesitate for a moment when I asked him to be acting CEO," CSA president Chris Nenzani told a news conference.

"He has been acting CEO in the past and said he would come in to lend his support and put his shoulder to the wheel for (the) country."

Nenzani confirmed that former International Cricket Council CEO Dave Richardson had been first choice for the position, but the latter said he would rather play a supporting role given other commitments.

Cricket South Africa’s embattled chief executive officer Thabang Moroe has been suspended‚ partially bringing relief to an organisation that has been ...
Sport
1 year ago

"Richardson’s role will be to offer support and be available when required to put his services at the disposal of CSA. That ticks the box in terms of having stability at management level," Nenzani added.

Nenzani said Moroe’s disciplinary hearing will be handled by an independent body from outside of CSA and that the process should not exceed six months.

Nenzani added that discussions were continuing with Smith, the most successful test captain in cricket history with 53 wins, over the key role of director of cricket, with a four-test series against England due to start on Dec. 26.

He said both parties had committed to a deadline of Wednesday to come to an agreement.

CSA needs a long-term replacement for Ottis Gibson, whose deal was not renewed after a dismal World Cup in England.

"We have not yet agreed a contract, but with time of the essence, we need things to move as fast as we can. We have engaged with Graeme and he has agreed that by next week Wednesday, all the negotiations around the contract will be concluded so that we can enter into an agreement.

"Once you put your director of cricket in place, then processes around coaching and selections kick in."

Nenzani added CSA would also engage with the South African Cricketers Association over various grievances from the players’ union, including a proposed restructuring of domestic cricket.

Another blow for Cricket SA as Standard Bank abandons sponsorship

Standard Bank have confirmed that they will not renew their contract with Cricket South Africa (CSA) as the title sponsor for the Proteas when it ...
Sport
1 year ago

The Willowton Group‚ the manufacturers of Sunfoil cooking oil and former South African Test match sponsors‚ have called for the removal of embattled ...
Sport
1 year ago
Next Article