Rabada's back‚ but India's batters won't go away 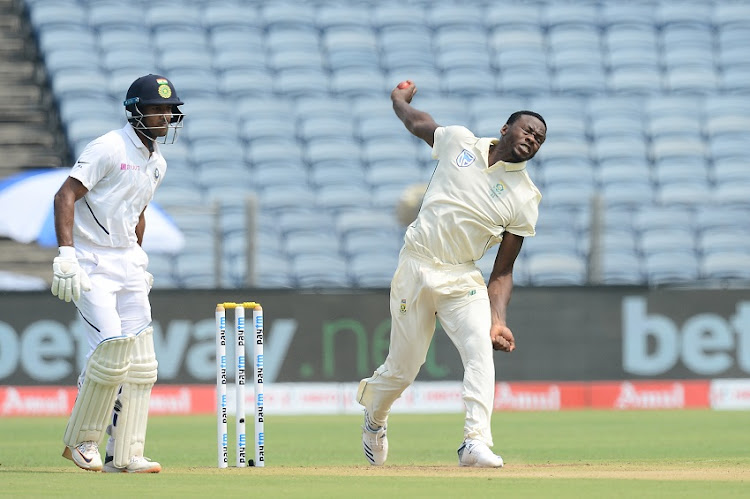 It was a common enough occurrence: 124 of Rabada’s 180 Test wickets have been earned by catches‚ most of them in the arc behind the wicket‚ 14 by Du Plessis.

But‚ as South Africa’s captain lay on the turf in Pune on Thursday‚ he stared at the ball in his hands as he as if he had never seen it.

First he screamed at the thing in celebration. Or was it relief?

Then he smiled at it blithely‚ as if it was an old friend too many times removed but now happily returned.

Then he stared at it some more‚ and seemed reluctant to hand it over so the game could continue.

Perhaps Du Plessis had forgotten what the ball looked like.

Almost four hours passed between Rabada producing an away swinger that found the edge of Rohit Sharma’s bat and was caught by Quinton de Kock‚ and Pujara’s wicket.

Another hour drained away before Rabada extracted a touch of extra bounce to surprise Mayank Agarwal‚ whose rocketing edge might have gone clean through Du Plessis’s wishbone had he not taken the catch.

Near on five hours of hard work for three wickets is no-one’s idea of an easy time‚ but that was as good as it got for South Africa on the first day of the second men’s Test — which ended 4.5 overs early because of bad light with India having reached 273/3.

Maybe Du Plessis was still wondering why his luck seems to have deserted him at the toss on foreign fields.

The coin has come down the wrong way for him in his last six away Tests in charge‚ and for all seven games — across the formats — he has led his team in Asia.

That must be part of the reason for the more alarming statistic that South Africa have lost 10 of the 19 away Tests they have played in the past four years.

In the four years before that they played 21 on the road and won 10; a clear illustration of their reversal of fortunes in all senses.

On Thursday‚ as India did in the first Test in Visakhapatnam‚ they made Virat Kohli’s continued success at the toss count.

At least‚ they did after Sharma’s removal in the first hour‚ when the ball did plenty on a decent pitch.

“If you looked at the conditions this morning‚ the window was a lot longer for fast bowlers than in Vizag‚” bowling coach Vincent Barnes said in Pune. “With a bit more luck we could have had a few more wickets.”

As the day wore on the ball went to sleep on a surface that might as well have been covered by a fluffy duvet‚ and that helped Agarwal and Pujara take their partnership to 138.

Rabada was easily South Africa’s most threatening bowler on his best day in action for more than a year — he has gone 20 Test innings without taking five wickets — and took 3/48 in 18.1 overs.

“I look for the special spells when the circumstances are tough‚ and he bowled very well‚” Barnes said. “There were a lot of signs that he’s getting to the top.”

So why Du Plessis waited 23 overs before bringing Rabada back after lunch wasn’t completely answered by the fact that he had bowled spells of six and four overs in the morning session.

Ten overs after Pujara went Agarwal was on his way‚ but with another century to his record.

He followed his 215 in Vizag with 108‚ a classy performance from a player who had earned an unwanted reputation for not making the most of his starts.

How had he improved his discipline?

Partly‚ Mayank told a television interviewer‚ through “a lot of long distance running and meditation”.

The South Africans have spent most of their time on the field in this series doing something similar‚ though not out of choice.

And they would seem to be in for more of the same on Friday‚ what with Kohli 63 not out and Ajinkya Rahane looking set having faced 70 balls for his unbeaten 18.