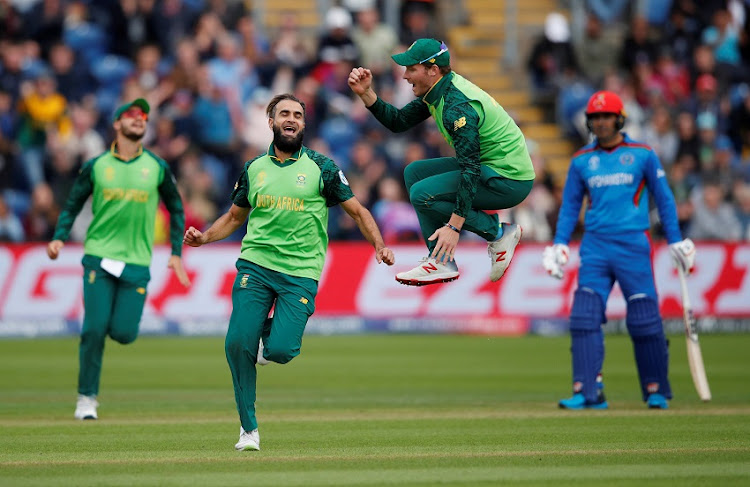 Led by Imran Tahir, South Africa’s attack overpowered Afghanistan to earn their first win in five games at the World Cup at Sophia Gardens on Saturday.

Faf du Plessis won the toss and put the Afghans in to bat on a green pitch, and they collapsed to 125 all out in 34.1 overs with their last nine wickets crashing for 69 runs.

South Africa, who had to chase a revised target of 127 in a match reduced to 48 overs per innings, won by nine wickets with 19.2 overs to spare.

The South Africans lost their first three games and another was washed out, and Saturday’s result kept alive their hopes of sneaking into the semi-finals.

Leg spinner Tahir took 4/29 and struck in the 22nd over with his first delivery of the match — a googly that cleanbowled Noor Ali Zadran, ending the opener’s sturdy innings of 58 balls in which he made 32, his team’s top score.

Asghar Afghan steered the fourth ball of the same over back to the bowler off the leading edge, and Tahir had figures of 3/3 after 14 deliveries when Gulbadin Naib pulled hard at a rank long hop and Aiden Markram held a stinging catch at midwicket.

With Kagiso Rabada bringing the heat, Chris Morris on song, taking 3/13, and Andile Phehlukwayo asking awkward questions for his 2/18, there was nowhere for the Afghans to take shelter from the pressure.

Rain interrupted play for the first time in the sixth over, and then after 20.

The initial break, of 26 minutes, didn’t seem to have much effect on Afghanistan’s performance.

But they appeared to be undone by the 66 minutes they had to spend sitting around the second time — they lost five wickets across 29 balls in the six overs after the resumption.

An opening stand of 39 between Hazrat Zazai and Noor was the biggest of the innings.

No. 9 Rashid Khan’s late blast of 35 off 25 balls was the second-biggest contribution to an innings that featured three partnerships of nought.

Hashim Amla and Quinton de Kock put on an opening stand of 104 to power South Africa to within sight of victory.

Amla improved his highest score in this tournament previously the 13 he made against England, to 41 not out.

De Kock’s effort was his second score of 68 of the World Cup, which he made against the home side.

South Africa will likely find the going tougher in their next match, which is against New Zealand at Edgbaston on Wednesday.