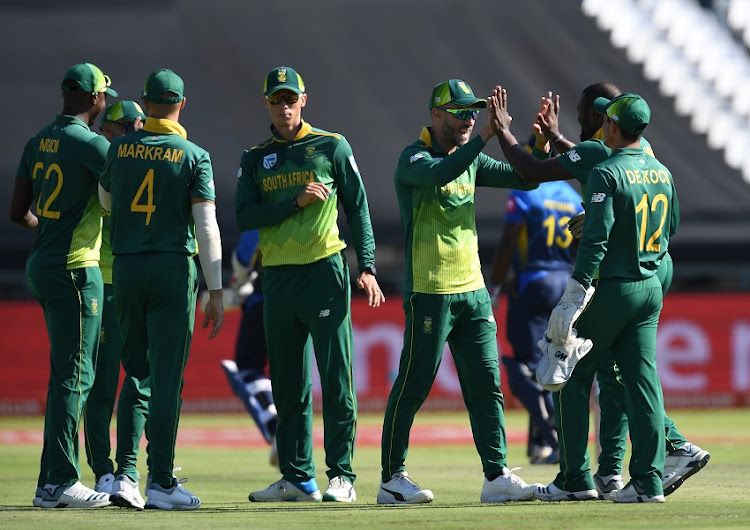 Aiden Markram finally sparkled in the green and gold but a faulty floodlight pylon dimmed his return to form in South Africa's 41-run Duckworth-Lewis-Stern assisted win in the fifth ODI at Newlands.

Sri Lanka's batting failure never in doubt but eyes were on the impending whitewash and Markram's innings. Markram (67*), who had two lives and a broken bat, finally displayed the his light-blue Titans form that has routinely incinerated domestic bowling attacks.

While he benefited from two early dropped catches, a rare Quinton de Kock (six) failure meant he had time to get in and dominate. And that he did when he progressed to his second ODI 50 off 58 balls, making up for the loss of captain Faf du Plessis (24).

The captain was uncharacteristically wild in getting out to Thisara Perera but the middle-order, untested in this series, needed to get the time in the middle against Sri Lanka's spinners.

The 70-run stand between Du Plessis and Markram took the wind out of Sri Lanka's sails. Rassie van der Dussen (28*) and Markram then stitched together a 57-run stand before the faulty pylon, which showed signs of malfunctioning before the sun had set, had the final say.

Play stopped at 7.18pm and just like that, SA's World Cup preparations ended. Sri Lanka, who had first use of a patchy and two-paced surface, had the phlegmatic Kusal Mendis to thank for their middling total.

The diminutive right-hander, who has yet to show off his best batting form, held the innings together reasonably well. However, when he was needlessly run out to leave Sri Lanka tottering at 136/5, it was a wasted start in every sense of the word.

Sri Lanka though did reasonably well to get past 200 after losing Avishka Fernando (nine) and Upul Tharanga (two) early.

They were 14/2 after four overs but a 49-run, third-wicket stand between Oshada Fernando (22) and Mendis (56) stabilised the innings.

There were also starts from Angelo Perera (31) and Priyamal Perera (33) but that's all their starts amounted to; nothing. With Newlands being a notoriously difficult ground to chase on, Sri Lanka needed those starts to be converted into half-centuries.

Through the series, Sri Lanka's batting hasn't covered itself in glory in the ODI tour but with SA's bowlers also wanting to prove a point after taking the foot off the pedal in Port Elizabeth, there wasn't going to be any respite for the tourists.

The cheap losses of Thisara Perera's (two) and Dhananjaya de Silva's (12) wickets saw Sri Lanka slip to 161/7 before a 61-run eighth-wicket stand between Isuru Udana (32) and Priyamal Perera added some respect to the scoreline.

The tail didn't have the required resilience but with the specialists ahead of them failing, they couldn't be blamed.