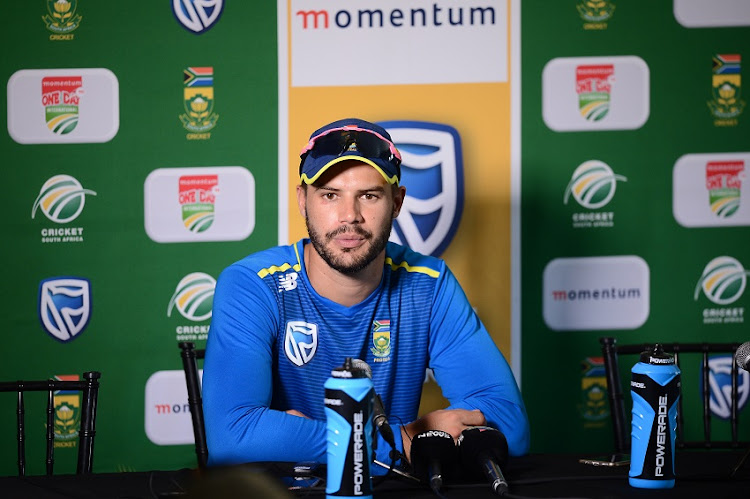 In-form Aiden Markram will look to make the most of his 11th hour chance when South Africa face Sri Lanka in the fourth Momentum one-day international at St George's Park on Wednesday (1pm).

Omitted from white-ball selection in the second half of the summer until now‚ the Titans batsman has been handed a lifeline and a late opportunity to stake a claim for World Cup selection.

South Africa have only two ODIs remaining before the World Cup squad is announced.

Markram is set to play at St George's on Wednesday in the first of those and will hope to get another go in the final match in Cape Town on Saturday.

The elegant righthander has played 16 one-day internationals for South Africa‚ the last of which was against Australia in Hobart on November 11.

He scored 32 off 42 balls in a match where both David Miller and Faf du Plessis scored hundreds.

The Proteas have since played eight ODIs (five against Pakistan and three against Sri Lanka) and Markram has not featured.

It appeared he was out of favour for selection to the World Cup squad despite calls from the cricketing community to give him a crack in the series against Pakistan and Sri Lanka.

But an avalanche of Momentum One-Day Cup runs where he scored 169‚ 139 and 85 in consecutive innings for the Titans has finally seen him kick the door down.

He will now be wanting to force his way into the 15-man World Cup squad by capitalising at St George's and Newlands.

Markram said he had initially accepted being dropped from the squad‚ opted to make a difference in domestic cricket with the Titans.

"By no means do I really feel or have I looked into selection the last couple of weeks‚" Markram told a media conference at St George's on Tuesday.

"I was obviously left out of the squad and rightly so. The numbers just weren't good enough. Since then it's been a case of trying to take selection out of my mind.

"I've been with the Titans for a couple of weeks now and I was really just trying to invest all my energy and efforts into that team.

"I'm going to come here with the exact same mind-set. I'm going to try and be full of energy and full of positive vibes for the side and we'll see what happens."

The 24-year-old said he would do all he can to convince the selectors to pick him for the global show-piece in England and Wales starting end of May.

"I'll fight tooth and nail to try and get into that squad‚ so by no means am I just floating about and hoping to get in.

"I'm trying my best. But I think things have been put into perspective and whether it happens or not it sits easy with me.

"I just want the Proteas side to go there and really win the World Cup for the country."

South Africa bring an unassailable 3-0 lead into St George's Park as well as one other change in personnel in recalled allrounder JP Duminy.

Although there has apparently been no talk of a whitewash within the camp‚ Markram said there would be no relenting.

"We'd love to keep winning and to keep drilling the habit of winning. And I still think as a side we striving for a lot more than where we are‚" he said.

"We spoke about each player trying to get better and to take themselves to places they've never been before and that's the thought at the moment.

"It's up to each player to set a standard pretty high and to chase that bar. I don't think there is too much emphasis on a whitewash."

Markram‚ who scored a hundred for the Titans at St George's Park last Sunday‚ is hoping for a similar surface on Wednesday.

Lankan leftarm seamer Isuru Udana had to wait seven years after making his debut in 2012 before taking his first ODI wicket in Durban on Sunday.

He ended up with two scalps on the day in what was his third game and says the team will be up for a fight in Port Elizabeth.

"There are two games left and we planning on winning those games.

"That will be a good platform for the T20 series. I think if we can do the basics well‚ we can beat the South Africans‚" said 31-year-old Udana.