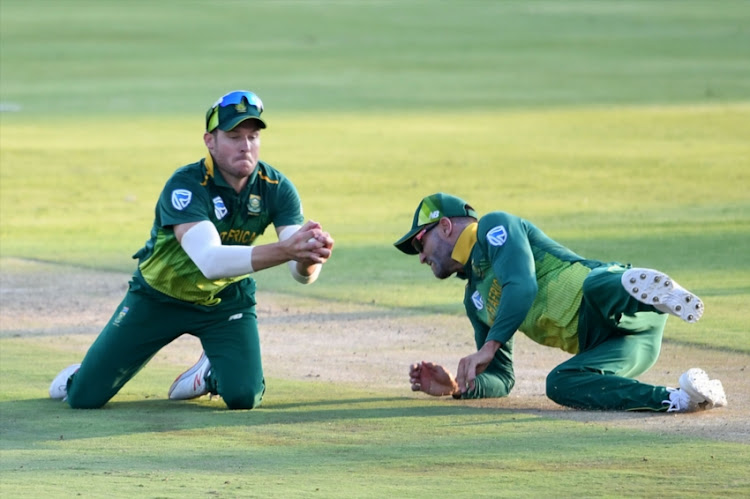 David Miller of the Proteas takes the catch for the wicket of Kusal Perera of Sri Lanka during the 2nd Momentum ODI match between South Africa and Sri Lanka at SuperSport Park on March 06, 2019 in Pretoria, South Africa.
Image: Lee Warren/Gallo Images

South Africa appears to be preparing to gamble on using middle order batsman David Miller as cover for wicketkeeper Quinton de Kock at the World Cup in England.

Heinrich Klaasen‚ who has featured in 14 ODIs and played his last match against Pakistan in January‚ is out of favour and De Kock is likely to be the only recognised wicketkeeper at the tournament.

When South Africa lost to New Zealand in the semifinal of the 2015 ICC World Cup‚ former Proteas coach Russell Domingo had retired AB de Villiers as cover for De Kock. But all indications are that they are prepared to take the unorthodox route with Miller.

The Miller experiment was put into practice during the commanding 113 runs win over Sri Lanka in the second ODI at SuperSport Park on Wednesday night where he came on for De Kock and kept wicket for the last eight balls of the match.

De Kock walked off the field at the end of the 31st over as a precaution after he was hit by the ball on a finger and Miller kept the wicket for the last eight balls of the match. He came close to grabbing his first stumping but Vishwa Fernando was alert.

“My finger was getting a little bit sore‚ I went off just to get some ice and David Miller decided that he will take over‚” explained De Kock‚ adding that Miller and Van der Dussen have been working on their keeping.

“Miller and Rassie have been working a little bit on their wicket keeping.

"I try to help where I can but it is just for cases of emergency like in the middle of the game.

"With regards to my finger‚ it’s all good from my side and there is no need to worry about.

"It was the usual finger issues that as a wicketkeeper you will get from time to time‚ but I am okay.”

De Kock‚ who fell on 94 and missed out on his 14 ODI century‚ admitted that he was frustrated when he was bowled by Thisara Perera.

“I was quite disappointed because lately I have not been converting these eighties and nineties into big hundreds‚" he said.

"I am disappointed but at the same time a knock like this will help me with confidence going forward and hopefully soon enough I will score big.

"I just have to keep working hard going with the routines I have doing recently because every season you find something that works for you.”