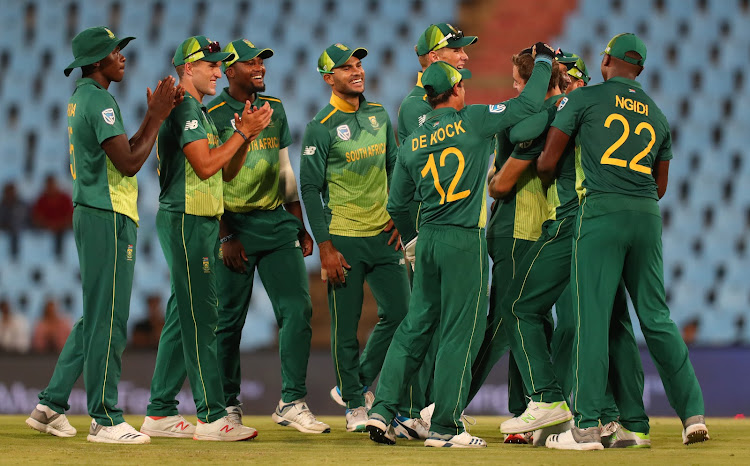 Anrich Nortje of South Africa celebrates with teammates the wicket of Oshada Fernando of Sri Lanka during the 2019 One Day International match between South Africa and Sri Lanka at Supersport Park Stadium, Pretoria on 06 March 2019.
Image: ©Samuel Shivambu/BackpagePix

Quinton de Kock once again showed how vital he is going to be for South Africa at the World Cup with a belligerent knock of 94 off 70 to help the Proteas to a 113 runs victory over Sri Lanka at SuperSport Park on Wednesday night.

Kagiso Rabada also had a lot to do with this comprehensive win, which was achieved with seventeen overs to spare, for his figures of 3/43 as South Africa bowled out Sri Lanka for 138 to take a 2-0 lead in the series.

On a day where the most of Proteas batsmen failed to cover themselves in glory as they were bowled out for a below-par score of 251 inside 46 overs, De Kock once again stood tall and he was unlucky not to have registered his 14th ODI century.

This was another aggressive performance by the left hander, who was named the man of the match, and it was a follow up to his 81 off 72 in the first match in Johannesburg last weekend where captain Faf du Plessis scored a hundred as South Africa won by eight wickets.

By the time he was caught by Niroshan Dickwella off the bowling of Thisara Perera in the 21st over, De Kock had dazzled the Centurion crowd with seventeen boundaries and one maximum as he continued with his rich vein of form.

Other notable contributors to the scoreboard were Du Plessis (57), who went past 5000 ODI runs, Reeza Hendricks (29) and David Miller (25).

But the worry for the Proteas is that they lost the last five wickets for 31 runs as the Sri Lankans bowlers ripped through the middle and lower order.

The South African bowlers made light work of defending their score as they continued to impress as a unit by bowling Sri Lanka, who they failed dismally with the bat and their highest scorer Oshada Fernando only managed 31, for 138.

The pick of the South African bowlers was Rabada, who claimed his 100th ODI wicket, with three to his name while Anrich Nortje, Imran Tahir Lungi Ngidi claimed two each on what turned out to be a good day in the office with ball in hand for them.

For Si Lanka, Thisara Perera was the toast of the bowlers as he returned with three scalps, Dhananjaya de Silva and Lasith Malinga took two apiece while Akila Dananjaya, Kasun Rajitha and Vishwa Fernando took one each.

The Proteas travel to Kingsmead in Durban on Sunday looking to wrap up the series with two matches in Port Elizabeth and Cape Town to spare as they continue to prepare for their World Cup campaign that starts with hosts England.