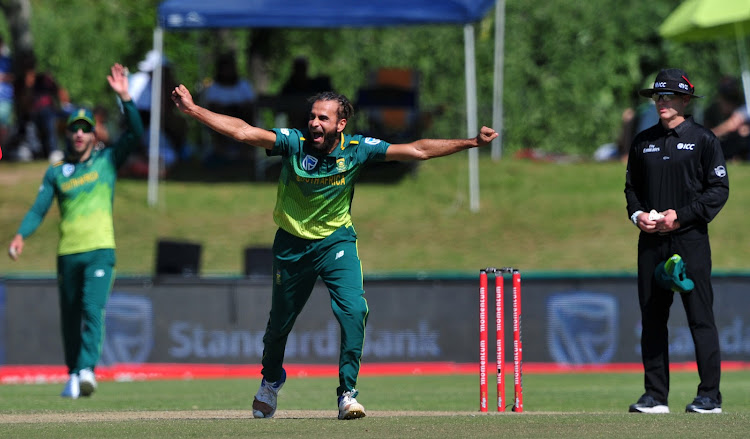 The Proteas premier spin bowler Imran Tahir appeals for a wicket during the Momentum ODI Series game between South Africa and Zimbabwe at Boland Park in Paarl on October 6, 2018.
Image: Ryan Wilkisky/BackpagePix

Imran Tahir‚ South Africa’s likely first-choice spinner at the coming World Cup‚ has not had his contract renewed.

Neither have JP Duminy‚ another World Cup probable‚ nor Chris Morris‚ at least a possible‚ kept their jobs.

AB de Villiers‚ who retired from international cricket in May last year‚ was also not among the contracted men’s players announced by Cricket South Africa (CSA) on Friday.

Tahir turns 40 on March 27 and is probably near the end of even his lengthy career‚ while Duminy and Morris have‚ for reasons of form and fitness‚ been involved in only 10 and four of the 33 games South Africa have played since CSA previously announced contracts‚ in March last year.

Theunis de Bruyn and Reeza Hendricks were the only additions to a list that has been trimmed from last year’s 18 signings.

“We have contracted 16 men’s players and 14 women’s players which we feel is the appropriate number to maintain our national squads across the various formats‚” CSA chief executive Thabang Moroe was quoted as saying in a release.

“This enables us to contract both our Test players as well as those who are limited overs specialists.” Interest in who the secured players might be has been heightened since Tuesday‚ when Duanne Olivier revealed he had put his international career on hold by signing a Kolpak deal with Yorkshire.

Friday’s announcement will be taken as a commitment from the named players to the national cause‚ even though in reality they could opt to take up employment elsewhere or retire.

Raisibe Ntozakhe‚ the off-spinner who was banned for an illegal action before last year’s World T20‚ is among the women contracted.