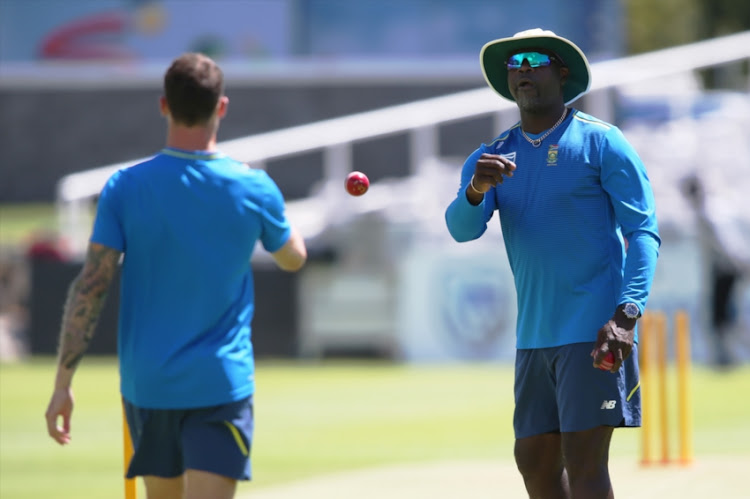 The plot around Ottis Gibson’s possible return to England is thickening‚ what with one of his former charges there voicing dressingroom support for that development.

Faf du Plessis‚ too‚ has left no doubt that Gibson has added significant value to the South Africa environment.

But Gibson’s current employers‚ Cricket South Africa (CSA)‚ have yet to say whether they have taken note of the situation.

Instead‚ they have left him — publicly‚ at least — with no option but to believe he will need a new job if South Africa don’t win the World Cup.

Gibson‚ who has had two stints as England’s bowling coach‚ has been South Africa’s head coach since September.

But‚ according to a report in the UK Sunday Times at the weekend‚ he is “understood to be keen on returning to the England set-up” — this time as head coach after Trevor Bayliss’ contract expires in September.

On Monday South Africa’s team management denied‚ on Gibson’s behalf‚ that he has had discussions with the England Cricket Board.

On Wednesday the England team’s communications head‚ Danny Rubin‚ told SowetanLIVE from the Caribbean: “We will not comment on newspaper speculation.

"There are no foundations whatsoever to this story. There is nothing further to say on the coaching set-up with the England men’s cricket team.”

Not that the smoke from what could be a fire will be blown away quite so easily.

“I know he’s had two short spells with England and the guys really rate him and trust him‚ I guess‚” England fast bowler Mark Wood told the BBC on Tuesday.

“Trust is a major quality to have ... he’s (Gibson) been head coach of the West Indies [and] South Africa‚ so I’m sure he’d be a good candidate for England in the future if he was to put his name in the hat.”

Wood knows of whence he speaks: Gibson was the bowling coach for the first 31 of the 51 games he has played for England in all formats.

Fifty-one is also how many games Gibson has held the reins for with South Africa; time enough for Du Plessis to pass judgement.

“If Ottis is still keen to do it the team would still love him on board‚” Du Plessis told reporters during the one-day series against Pakistan.

“The team really work well under him. From a captain’s point of view I’ve really enjoyed working with him.

“Our styles are very similar‚ our dressingroom is very calm. I think that is important in international cricket.”

Much of the above wouldn’t carry as much weight had CSA chief executive Thabang Moroe not told reporters in Johannesburg last month that Gibson had been hired “purely to win the World Cup” in England from May to July.

“As it stands his contract states he has to win the World Cup‚” Moroe reiterated.

What could that mean besides that Gibson will be unemployed if a team who have never won the World Cup get over the line this time?

“The board is still in discussion regarding the coach’s contract and once a call is made we’ll communicate to the media‚” Moroe told TimesLIVE on Wednesday.

In fairness to Moroe‚ his assertion in January might have been a warning to CSA’s often misty-minded board that they had better find clarity on Gibson’s position sooner rather than later lest they lose his clearly prized services.

What did Gibson think of what Moroe said last month?

“With regards to the comments‚ I have no comments on the comments‚” Gibson told reporters after the Pakistan ODIs.

That doesn’t tell us much‚ but he will know that his predecessor‚ Russell Domingo‚ said he wasn’t sure where his next paycheque was coming from mere weeks before Gibson’s appointment was announced.

His CSA cookie crumbled better than Ray Jennings’‚ who was discarded less than eight weeks after returning home in triumph having coached South Africa all the way to glory at the 2014 under-19 World Cup.

So even lifting the trophy at Lord’s on July 14 might not be enough to keep Gibson in a South Africa tracksuit.

If he doesn’t already‚ he would do well to understand exactly who and what he’s dealing with.

And to plan accordingly.