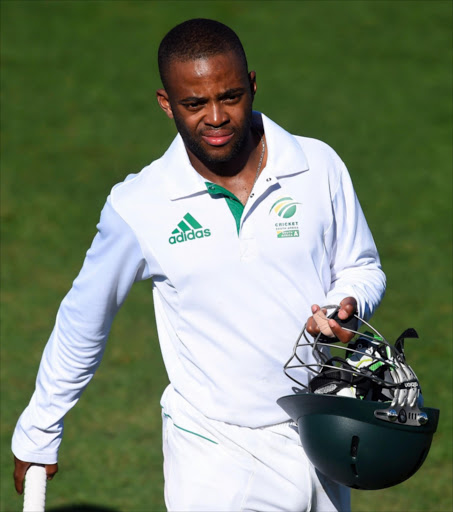 What could have been a near-perfect session for South Africa was spoiled by the dismissal of Quinton de Kock on 39 off 74 when he was caught by Mitchell Marsh at mid-on from the spin of Nathan Lyon.

But‚ the home side will be satisfied with their work with the bat thus far as they reached lunch sitting comfortably on 400/7 after 115 overs.

Bavuma’s half-century‚ which came off 120 balls and included six boundaries‚ arrived in the first ball of the 110th over when he punched Lyon through the covers to raise his hand and acknowledge the appreciative crowd.

In his previous 28 matches Bavuma had failed to convert good starts into considerable scores and he will be hoping that Vernon Philander and the rest of the tail assist him to push for what would be only his second test century.

The duo resumed South Africa’s first innings on the second day on 313/6 and by the time De Kock departed shortly before the lunch break‚ they had added valuable 71 runs while in the process they managed put together a partnership of 85.

Bavuma will resume after lunch on 61 off 138 balls and supported by all-rounder Philander‚ who had only contributed 6 runs to the scoreboard since he arrived after the demise of De Kock‚ who was looking good on the crease.

South Africa‚ who reached the 400 runs shortly before the umpires ordered the players to the pavilion for lunch‚ still have spinner Keshav Maharaj and fast bowler Morne Morkel in the bank to try and push the score as far as possible..

Normal service resumes at Wanderers‚ but for how long?

Strange scenes unfolded at the Wanderers on Friday‚ the like of which have not been seen for weeks.
Sport
3 years ago

Less chat on the field in this test‚ says Aiden Markram

Proteas opening batsman Aiden Markram said after the opening day of the fourth Test at Wanderers on Friday that there was less chatting from the ...
Sport
3 years ago
Next Article