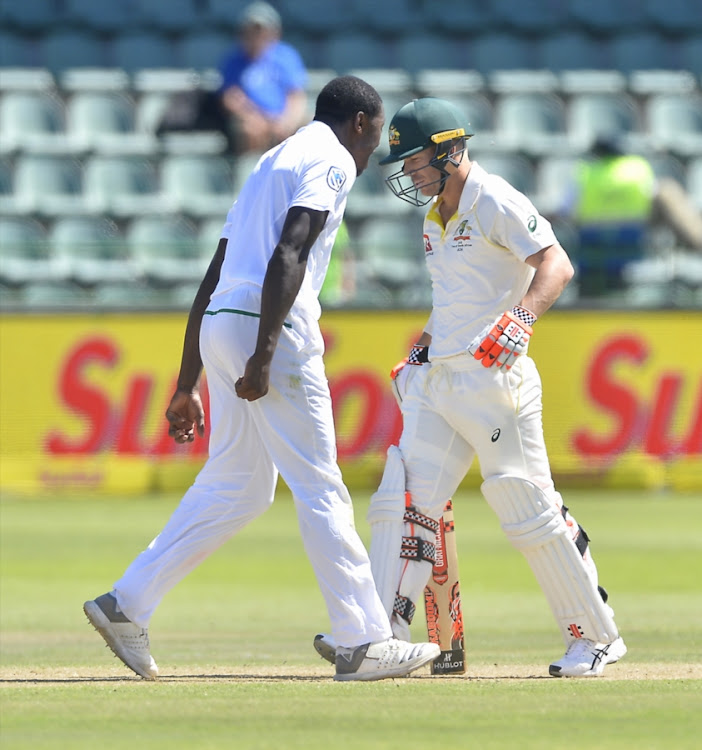 Kagiso Rabada has been banned for the last two Tests of South Africa’s series against Australia‚ the International Cricket Council (ICC) confirmed on Monday.

But South Africa are considering making a last-gasp legal attempt to try and keep the fast bowler in their XI for the third Test at Newlands‚ which starts on March 22.

Rabada‚ who completed a match haul of 11/150 in the second test at St George’s Park on Monday‚ which South Africa won by six wickets to square the series at 1-1‚ was fined 50% of his match fee and docked three demerit points.

An ICC release said he had “made contact with Steve Smith with his shoulder” after dismissing Australia’s captain on Friday.

Rabada contested that level two charge of “inappropriate and deliberate physical contact with a player” but accepted a level one rap for “using language‚ actions or gestures which could provoke an aggressive reaction from a batsman upon his or her dismissal”‚ which he incurred by giving David Warner a verbal send-off on Sunday.

The latter took a further 15% of his match fee and earned another demerit point.

Players are banned for two matches when they accumulate eight demerit points‚ and Rabada went into the match with five.

“I found that there was contact between Rabada and Smith‚ and in my judgement the contact by Rabada was inappropriate and deliberate‚” the release quoted match referee Jeff Crowe as saying.

“He had the opportunity to avoid the contact‚ and I could not see any evidence to support the argument that the contact was accidental.

“It is also disappointing that this has happened the day after the pre-match meeting I had with both teams‚ where the importance of respect for opponents was highlighted.

“I take no pleasure in seeing a player suspended‚ particularly a young player of Kagiso’s talent‚ but he has now breached the ICC code of conduct on a number of occasions.”

Since February 2017 Rabada has fallen foul of the disciplinary system five times and been banned once before.

Cricket South Africa and Rabada have 48 hours to appeal Crowe’s decision‚ and team management said soon after the verdict was handed down on Monday afternoon that they were‚ “seeking legal counsel on what decision to make”.

If an appeal is lodged‚ team management said‚ Rabada “will still be suspended unless the judicial commissioner is appointed early and hears an argument to allow him to still compete whilst the hearing is being sorted out”.

That would seem an awfully long shot.

Mitchell Marsh lost 20% of his match fee and gained a demerit point for swearing after he was dismissed by Rabada on Monday.

Kagiso Rabada could be banned for the rest of South Africa’s increasingly ill-tempered test series against Australia.
Sport
4 years ago

Fired-up Kagiso Rabada rocked the Australians with five wickets as South Africa completed day one of the second cricket test in the ascendancy at St ...
Sport
4 years ago

SA made steady progress losing only one wicket in the first session of day two in the second cricket test against Australia.
Sport
4 years ago
Next Article