Bout against Katiandagho a step towards healing for boxer 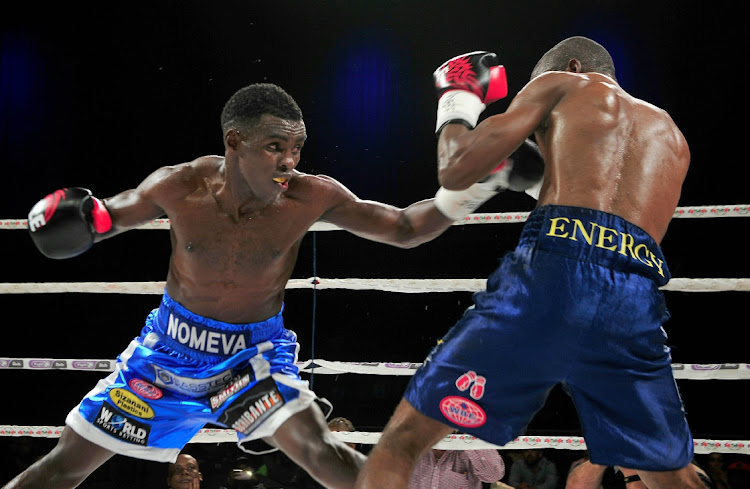 Xolisani “Nomeva” Ndongeni is still bleeding from the wound inflicted on him in the defeat by unfancied Sibusiso “Prince” Dlomo, who knocked him out in the seventh round on October 17 last year.

This emerged this week during an exclusive interview with Ndongeni ahead of his 10-rounder with Sonny Katiandagho from the Philippines in TLB Promotion’s event at eMnotweni Casino in Mpumalanga on December 11.

The former world champion from kwaBhaca had been undefeated in a local ring since his first pro boxing match in 2010. Ndongeni’s first loss after 25 straight wins was in the US in 2019 against Devin Haney.

Ndongeni has already redeemed himself with two consecutive knockouts, and in the process he picked up the WBA Pan African junior-welterweight belt, but the scar caused by the loss to Dlomo refuses to fade.

Ndongeni – now based in Johannesburg – said: “I have been dropped before by Wandile Mseleku and Patrick Malinga who hurt me badly but I got up and defeated them. I then got dropped by Prince and I was counted out. That hurt me so bad. Defeat is acceptable but to lose my first fight at home where I have defeated some big names like that can’t just go away, it's sad.”

“I appreciate the way how Joyce Kungwane [promoter] is guiding my career. We are stepping up now after knocking out two Malawians. I still have four years in this game, so there is no rush for titles,” he said, adding that he watched Katiandagho sparring with homeboy Manny “Pacman” Pacquiao.

“He is good; it is going to be a big and tough fight but I will be ready for anything that he brings to the fight.” Meanwhile, Ndongeni’s tormentor Dlomo takes on WBA Intercontinental champion Yauheni Dauhaliavets in a non-title 10-rounder in Russia tomorrow.

Dauhaliaves is a stubborn Belarusian who boasts a stoppage win over ring veteran and former multiple international champion Koos “The Great Last Warrior” Sibiya. Dauhaliavets is undefeated after six fights while the Charity Mukondeleli-trained Dlomo – a national junior-welterweight title-holder – has 10 wins against 11 losses.

It is factually incorrect for boxing people to distort the truth and instead misinform the fight fraternity with lies that end up hurting both the ...
Sport
3 weeks ago

SA’s rich history with the International Boxing Federation (IBF) junior-lightweight boxing title should stimulate Azinga Fuzile in his quest to ...
Sport
3 weeks ago

History in the local female boxing will be made on December 4 when a national title fight will be contested after a review panel of judges scored it ...
Sport
3 weeks ago

Finally, the secret is out: Zolani “Last Born” Tete will participate in TLB Promotions' international tournament next month, promoter Joyce Kungwane ...
Sport
3 weeks ago
Next Article