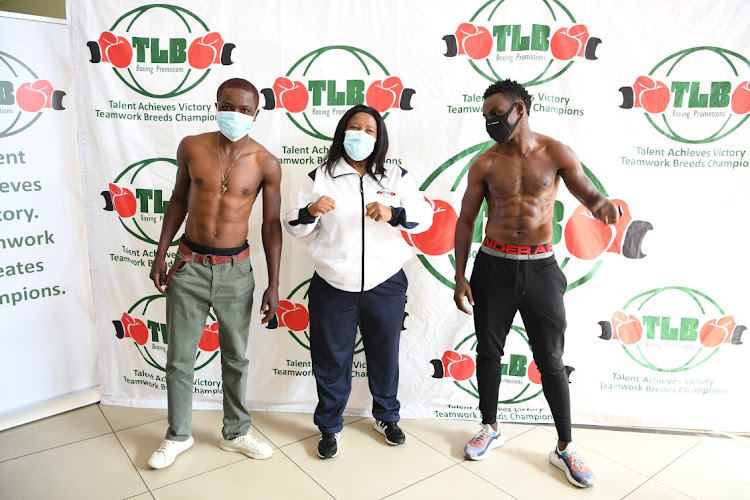 Peter Pamabeni of Zimbabwe and Xolisani Ndongeni of South Africa with TLB promoter Joyce Kungwane during the 'The Night of Honor and Passion' Boxing tournament press conference at DOCC YMCA on June 22, 2021 in Johannesburg.
Image: Lefty Shivambu

Boxing SA must move with the times and conduct private weigh-ins early in the morning to allow boxers enough time to recover from the torture of starving themselves to be within required weight limits, says Xolisani Ndongeni.

Ndongeni will welcome Zimbabwean Peter Pambeni for the WBA Pan African title at the DOCC Hall in Soweto on Saturday night.

“Images that are taken of us do not give a  good advert about boxing. Sometimes weigh-ins drag on for long either because the doctor is late or promoters want to give politicians time to talk. After all that dragging, we are still expected to talk to the media,” Ndongeni explained.

“The only thing in your mind at that time is food. I have seen a boxer in East London being brought to the weigh-in on a wheelbarrow because he was so drained he could not walk.

“His trainer had to lift him up to the scale and quickly took him back home. Imagine had he been overweight and had to run to shed those extra kilograms when he already looked dead. I am pleading with BSA to reconsider the time for weigh-ins before a boxer dies from dehydration before jumping on the scale.”

Ndongeni has no weight issues. Looking fit, healthy and bubbly as always, the popular Johannesburg-based boxer from Duncan Village tipped the scales at 66kg.

“The US conducts weigh-ins very early in the morning, around 8am behind closed doors, with only board members, boxers, trainers and managers attending. Boxers’ weights are recorded. They then go back to their hotel rooms to eat, relax and recover,” he said.

“Two to three hours later they attend a press conference looking like healthy human beings to face journalists. During that time, they have eaten and drank whatever they drink to recover and are ready to face the public.

“If you notice during those press conference the only thing you see on the table is water. That press conference is basically about [the] face-off, answering questions, selling themselves to potential sponsors while profiling the sport. I can bet with my last cent you will not see local boxers pushing and shoving each other around in press conferences because they have no energy.”

He added: “Some boxers would have gone to bed the previous night without food because of weight issues. Those boxers look like a zombies. Waiting for those late hours for the weigh-in is suicidal.”

Arnold “Squire” Nodadile, CEO of J4Joy Boxing Promotion, has thrown the term “mayisuke” , a Nguni word that is used to stimulate warriors to war, in ...
Sport
1 year ago

Contender No 3 for the SA junior welterweight title Xolisani Ndongeni says he is not interested in challenging for the national title as long as ...
Sport
1 year ago
Next Article