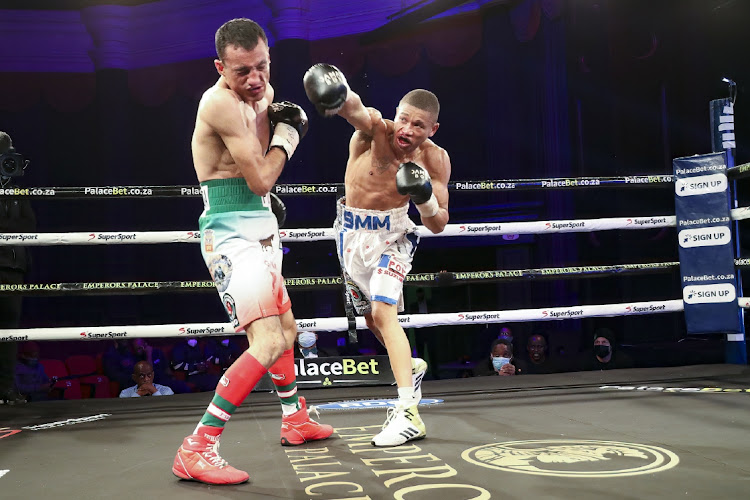 The Mexican came out guns blazing in the last two rounds of their closely contested fight, looking for a knockout, but Lamati’s limber legs saved him from what turned into a nail-biting finish.

The South African – who was bleeding from the nose and from a cut underneath his left ear – emerged victorious via a majority points decision. Two judges scored the fight 115-113 and 116-112 while their colleague declared it a draw at 114-114.

Lamati remained undefeated after 19 fights. The tough-as-nails Mexican whose marauding approach in the last two rounds forced all trainers and boxers from earlier fights to rally behind their troubled countryman – all suggesting survival techniques – suffered his second defeat in 15 fights. The end was a huge relief for promoter Rodney Berman and partner Garry Pretorius whose Golden Gloves company delivered the promise made last year after signing Lamati that they would make him a world champion sooner than expected.

In the final analysis Lamati made it difficult for himself and it became a war. Instead of sticking and moving, the skilful sharp shooter would stand in front of Estrada, who rocked Lamati with a solid combinations at close range. His short uppercuts were a serious problem for Lamati. Also, Lamati was unfit. The fact that he was overweight in both the pre-fight medical and the actual weigh-in is full proof of this.

In the main supporting bout, SA and ABU welterweight champ Thulani Mbenge demolished Jabulani Makhense in three rounds to add the WBA Pan African belt to his collection, while Roarke Knapp dismantled the tight defence of Benolt Makangila Vela of the Congo, who did not come out of his corner for round three.