Ducar loses to Lerena but finds marriage in ring 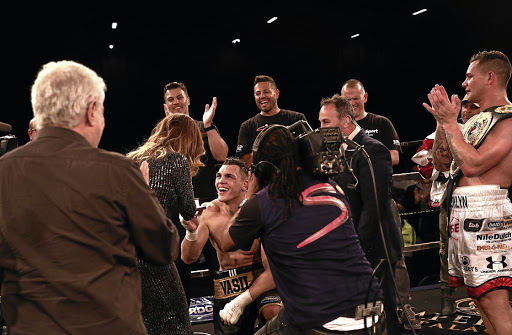 Battle-scarred Czech Republic boxer, Vasil Ducar, showed his softer side when he got down on one knee and proposed marriage to his girlfriend Irena inside the boxing ring.

Ducar did the proposing a few minutes after failing in his attempt to dethrone Kevin "Two Guns" Lerena for the IBO cruiserweight championship in their 12-rounder at Emperors Palace in Kempton Park, Ekurhuleni, on Saturday.

Tears of joy rolled down his girlfriend's face as the crowd gave the couple a rousing ululation.

"Thank you very much," she said upon accepting the proposal. Ducar - an eight-fight novice - deserves credit for going 12 rounds with a formidable champion who registered the fourth defence of the belt he won in 2017.

Lerena threw every punch in the book. Some landed while others could not pierce through the tight defence of Ducar. But even those that went through, seemed not to have hurt the challenger who had nothing to offer except to do what Mark Farah did after defeating Congolese Welcome Malubu in Boksburg in 2017.

Farah signalled to his girlfriend, Sharne Gerhardt, who turned 27 years old on the day, to join him in the ring.

Farah asked the crowd to sing a hearty Happy Birthday for her.

As she attempted to leave the boxing ring, Farah suddenly went on one his knee and asked her to marry him.

Briton Nigel "Dark Destroyer" Benn became the first boxer to propose in the ring when he did it at the Telewest Arena, Newcastle, in the UK, after receiving a proper thumping from SA's Thulani "Sugar Boy" Malinga in front of a huge crowd in March 1996.

Other results on Saturday: