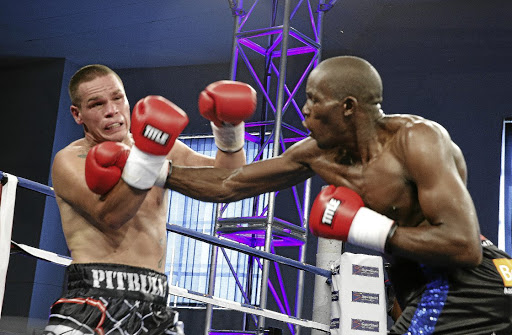 Walter Dlamini on his way to knock out 22-year-old Frank 'Pitbull' Rodriguez in the second round of their 10-rounder at KwaThema Community Hall in Springs, on the East Rand, on Sunday./nick lourens

Young fighters must not read too much into Walter Dlamini's age and ignore his dedication, level of fitness and current form because they will be in for a rude awakening, warns trainer Lionel Hunter.

Hunter was reacting to the manner in which the "Black Mamba", who turns 39 tomorrow, viciously knocked out 22-year-old Frank "Pitbull" Rodriguez in the second round of their 10-rounder at KwaThema Community Hall in Springs on Sunday.

Hunter said his charge - the current SA middleweight champion from Limpopo - is just like American legend Bernard Hopkins, who boxed successfully until he retired in 2016 at the age of 50.

"Many young fighters looked at Bernard's age and thought they will just walk over him but forgot that there is nothing that keeps a fighter going in the game even when he is over 40 other than clean living, dedication and going an extra mile in the gym.

"These youngsters must know one thing ... that age does not affect Walter at all. He lives clean, does not smoke or drink alcohol but instead he goes to church and trains hard."

Dlamini's short-route victory over Rodriguez was his second. "We are prepared to take on anybody. Whoever they put in front of Walter will be taken care of," said Hunter.

Dlamini - who bettered his knockout ratio to nine in 17 wins against six losses and four draws - said: "I knocked him down in the first round but the fight continued and I ended the job in round two. I am with a good coach who looks after me."

In another bout, Michael Mokoena made a mockery of current SA lightweight champion Thompson Mokwana, stopping him in the sixth round of their 10-rounder.

Prospect Lebo Mashitoa also stopped Limbani Lano from Malawi in the sixth round.