Dubious scoring by judges knocking the fistic sport out 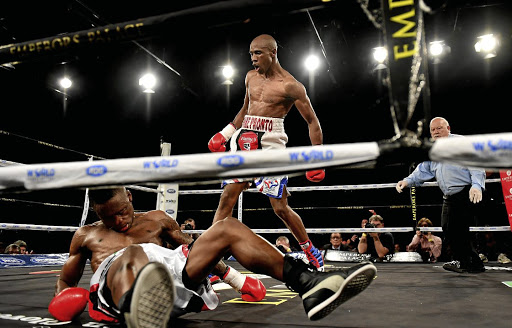 Michael Mokoena knocks down Lusanda Komanisi in the fourth round of the ABU lightweight title during the Call for Glory boxing event at Emperors Palace in Kempton Park on Saturday night.
Image: Johan Rynners/Gallo Images

Some South African boxing judges are so appalling in their scoring that it is like they go into some matches with their minds already made up.

Their arrogance has superseded their judgment, and many years in boxing suggest that they are rusty and need to be reminded of the basics of scoring a round.

Their dubious scoring was at play on Saturday night during the bout between Thabiso Mchunu and Thomas Oosthuizen in Kempton Park, where two judges voted Oosthuizen as the winner of the ABU cruiserweight title after 12 rounds. Their colleague scored it a draw.

The basic four pillars of scoring a round are effective aggression, ring generalship, defence, hard and clean punches. Oosthuizen did not tick even one of them.

Mchunu was the aggressor, defended himself well because no punches came his way and he landed few but hard and clean punches.

The night belonged to dark horse Michael Mokoena. The boxer just touched the already damaged Lusanda Komanisi, who fell like he had been hit with a three-pound hammer in the fourth round.

Komanisi's career could be over. In fact, it is clear that he suffered serious damage to his head when he was sent flying in the second round by Jhack Tepora for the vacant WBO Inter-Continental featherweight title in September last year.

The former IBO featherweight champion had not fought since that demolition yet the ABU sanctioned him to face Mokoena for its title.

Ryno Liebenberg talks hard and he delivers. He promised to knock out Alfonso Tissen, and the war-horse pulverised Tissen over five rounds to capture the ABU super middleweight title. These bouts formed part of Golden Gloves Call for Glory box-and-dine which attracted a big crowd.