Simwaka out to raise African flag 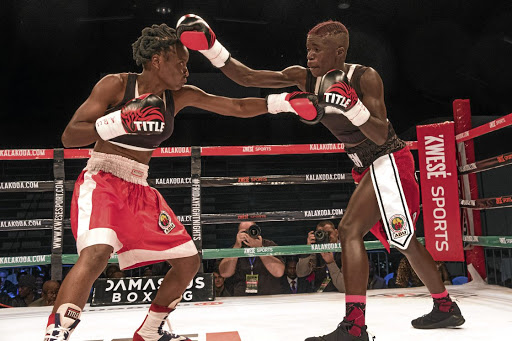 Smangele Hadebe, left, exchanges the leather with Ellen 'Tigress' Simwaka during the Africa Rising boxing event at the Portuguese Hall in May. /Gallo Images / Dan Edwards

Ellen "Tigress" Simwaka is on the cusp of writing the history of African female boxing.

The 22-year-old WBF International bantamweight champion will challenge for the vacant Commonwealth belt in Aberdeen, Scotland, on Saturday.

Simwaka will take on Kirsten Fraser for the belt which was previously known as the British Empire title.

No African female boxer has won the title. However, an African man, Nigerian Richard "Tiger" Ihetu won it in the 1950s.

Malawi-born Simwaka has been fighting in SA for three years now after she relocated with trainer Rodger Kumwenda.

She later dumped him and joined Rocky Weinstein who guided her to victory for the WBF International title against Smangele Hadebe in July.

Ellen "Tigress" Simwaka and Smangele "Smash" Hadebe could potentially be nominated for the next Boxing SA female fight of the year.
Sport
3 years ago

But Simwaka - who has seven wins, four losses and two draws since she started to box professionally - has also bolted Weinstein's stable to join Top Box of trainer Stephen Castle who is currently with her in Scotland for the boxer's all-important fight on Saturday.

"There are lots of dishonest people in boxing. It upsets me when you think people are there for you only to find that they are [there] for themselves," she explained yesterday.

Castle said: "When I was approached to work with Ellen, I didn't know much about her. I watched her train and do some sparring and [I] knew straight away that she has the potential to be a serious contender.

"Luckily, with the help of Andre Thysse (promoter) I managed to secure a Commonwealth title fight against Frazer in Scotland.

"The rest will be history when we win the title in Aberdeen."