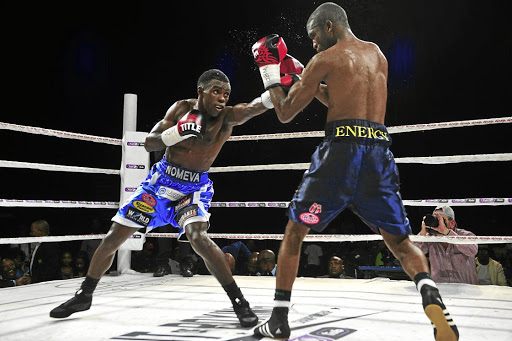 It is the first to take place at DOCC Hall in Orlando.

"They could have chosen any fighter. I am truly honoured," said the WBF lightweight champion who will defend against Tanzanian Salumi Jengo in the main attraction.

Ndongeni, who is trained by Sean Smith in Johannesburg, has such an aura that has many-a-time enabled him to single-handedly fill to capacity boxing venues back home in Eastern Cape.

Joyce Kungwane, one of the TLB bosses, explained yesterday that they chose DOCC Hall because that is where Nelson Mandela took his mind off liberation politics and flexed his muscles as an aspirant boxer.

"I've been in the gym since I won the title," said Ndongeni, who won the WBF title under TLB's inaugural tournament in Pretoria in April.

"I need a very clean win. From what I saw of Jengo in a taped fight, there are too many chances of me knocking him out early."

Mcotheli is fresh from a sixth stoppage win over Warren Joubert in Pretoria.

He also wants to visit his mother Rita in Pietermaritzburg.
Sport
3 years ago

Meanwhile, Kamanga, originally from Congo, is still basking in glory after his seventh-round stoppage of Tshifhiwa "Timer" Munyai in Seshego.