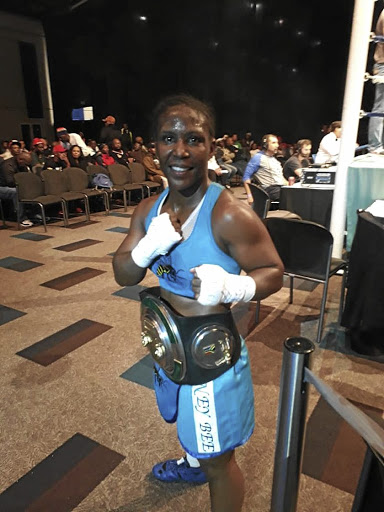 Newly crowned SA bantamweight female boxing champion Melissa "Honey Bee" Miller does not have appropriate words to describe the excitement when the Boxing SA belt was wrapped around her waist on Friday.

The pocket-sized 32-year-old from Eldorado Park, south of Johannesburg, defeated equally competent foe Thema Zuma from KwaZulu-Natal on points after 10 impressive rounds at the Sandton Convention Centre in Sandton, Johannesburg .

"I breathed a sigh of relief," said Miller, the mother of an 11-year-old boy (Jordan).

Miller had failed in five previous attempts to win a title. She had been dismissed as a no-hoper who should pack it in.

On Friday, the flurried punches she threw from all angles was reminiscent of the late Jacob "Baby Jake" Matlala, whose relentless fusillade of blows forced his opponents to focus on trying to block his punches instead of getting into their own rhythm.

"I said, finally, I did not have to go home with tears of disappointment but those of joy," said Miller.

"I was so happy to be called the champion."

Her mother, son, sister and aunt were ringside guests on Friday evening and they shouted their lungs out during the fight, which saved the night in a much-hyped yet unimpressive tournament.

Miller showed no sign of tiring, and credit must go to her trainer Lucky Ramagole, from Orlando in Soweto, who insists that a boxer be in the gym with or without an offer of a fight.

"I had been in the gym since January 8, which is our normal training," said Miller.

"I wanted this belt so bad because it could bring better purse money. I am a single parent who still lives with my mom."

She described Ramagole as being a great trainer, motivator and a father.

"If I don't have transport money to go to the gym in Orlando, either he sends me money or he fetches me and drops me at home after training. He is more a family now, more than just being my boxing trainer," she said, adding that "everybody around our family is over-excited about my achievement".

Miller was voted BSA female prospect of the year in 2016.

Now, she is the first female boxer from Eldorado Park to win a national championship belt.