Phuzi earns respect of Lerena from knockout of Thompson 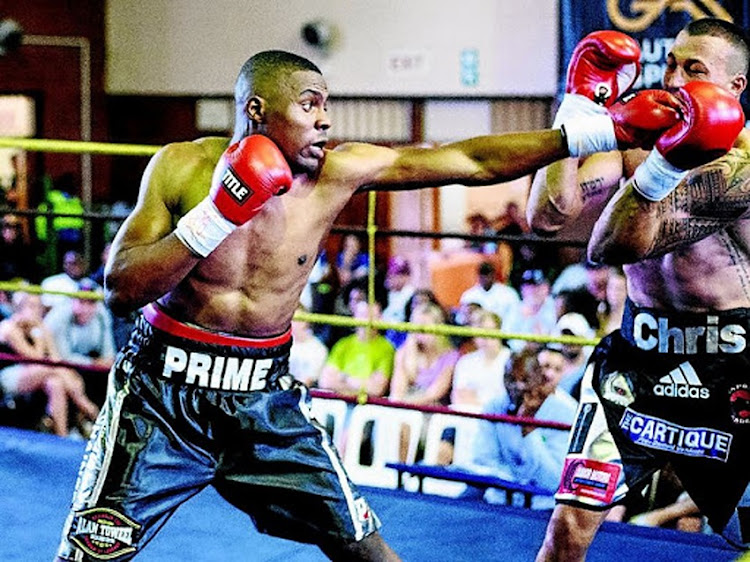 Akani "Prime" Phuzi and Chris "The Wolf" Thompson in their topsy-turvy bout in Randburg where Phuzi won on points over six rounds.
Image: Nick Lourens. © Sowetan

Phuzi also won the admiration of the boxing fraternity for his performance.

From Limpopo‚ and trained in Linden‚ Johannesburg by Alan Toweel Junior‚ the 23-year-old boxer who spent 14 years in the amateur ranks before turning professional last year remains undefeated in four fights with three knockouts.

He is already rated No.4 locally and the title is held by Lerena's stablemate Thabiso “The Rock” Mchunu.

Thompson‚ whose promising career is guided by trainer Gert Strydom‚ is rated No.5. The boxer from the West Rand suffered his second defeat to Phuzi‚ who handed him his first-ever loss in their first fight in Randburg in October last year.

There was so much noise about that first‚ topsy-turvy six-rounder that saw the two boxers exchange heavy punches violently with little concern to defending themselves‚ that some – as is always the case with boxing – disagreed with the verdict.

Some said Thompson deserved to win‚ and promoter Sandile Xaka decided to match them up again‚ but this time for the provincial title which was vacant.

It ended even before it started‚ and a deafening‚ pin-dropping silence from Thompson’s big crowd filled Blairgowrie Recreation Hall. They just could not believe what happened.

Lerena said that he would not mind working out with Phuzi‚ who demonstrated good power in knocking over Thompson in their eagerly-awaited rematch.

“I like Akani and Thompson too‚” Lerena remarked about the new boys on the cruiserweight block.

“If Chris learns from his mistakes‚ he can get back. He’s a decent fighter with a great physical structure. The loss needn’t be the end of the road.”

With a little more than a month to go‚ Lerena is itching to get back into the ring. He knows that big opportunities await‚ as long as he keeps winning.

Lerena gets back to serious business this week after an injury setback. The supremely-built left-hander‚ whose growing career is guided by both trainer Peter Smith and veteran promoter Rodney Berman of Golden Gloves‚ begins sparring for the second defence of his IBO belt in Azerbaijan on June 2.

Lerena – now the biggest drawcard at Emperors Palace – will defend against Roman Golovashchenko of Ukraine.

Lerena‚ who won the belt in Kempton Park against France-based Congolese Youri Kayembre Kalenga on September 9 last year‚ was thrown off track after a nasty case of bursitis in his elbow. But he has been given the all-clear to resume full training.

Not that he has slacked off. Recent weeks have seen him get stuck into base training‚ working on gameplans‚ skills and plenty of cardio work‚ ensuring he’ll be fitter than ever for his fight against Golovashchenko.

“The injury responded well and I’m not uncomfortable at all‚” he said. “I’ve felt good on the heavy bag‚ but I guess the real test will come during sparring.”

Despite a dearth of top quality cruiserweights to work with‚ Smith has lined up a couple of strong Congolese and has also reached out to South Africa-based Ukrainian Vlad Sirenko‚ who trains with SA heavyweight champion Ruann “Giant King” Visser as his gym in Meyerton.

Visser and Sirenko are trained by veteran American James Ali Bashir‚ who was part of the camp of both Vladimir and Vitali Klitschko.