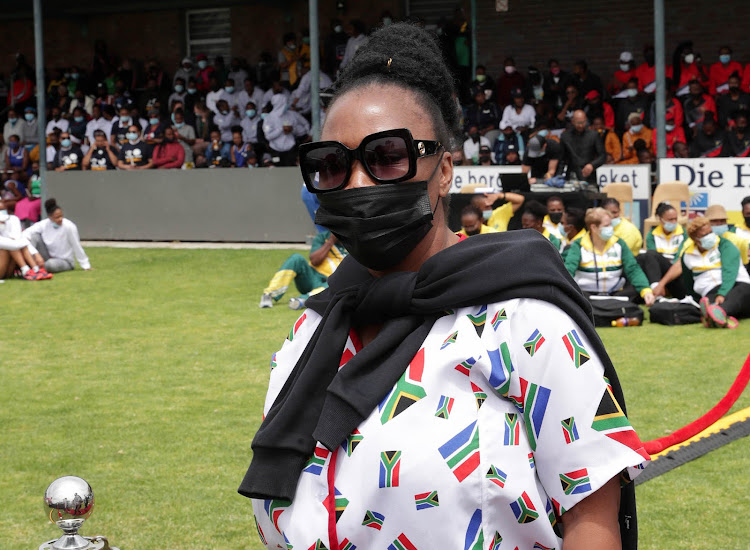 Netball South Africa (NSA) vice president Mami Diale was part of the delegation that consulted with the families of the deceased.
Image: Reg Caldecott

Netball South Africa (NSA) has confirmed that funeral arrangements of the four people who died in a horrific bus accident on their way to the Spar National Championships on Sunday have been finalised.

There will be a joint memorial service on Monday at the Mthata Municipality Hall (10am) and they will be buried next week at different places in the Eastern Cape.

Former Eastern Cape Aloes assistant coach Nocamagu Mvunyiswa will be buried on December 14 in Mthatha and player Indiphile Mfengu will be laid to rest on December 15 in Cala.

“Loss of life is something that we are never prepared for and once again as Netball South Africa (NSA) we would like to send our heartfelt condolences to the families that have lost loved ones,” said Diale.

Netball SA (NSA) is forging ahead with its plans to prepare the Proteas for the Commonwealth Games in Birmingham, England, next year.
Sport
6 months ago

“We are in the same pain as you because the deceased were also a part of our netball family. To all those injured and still in hospital or recovering at home, we would like to wish them a speedy recovery,” she concluded.

Meanwhile, the championships have reached the business end in Bellville with Cape Town taking on Nelson Mandela Bay (NMB) and Cape Winelands up against Johannesburg in the semifinals on Friday.

The four senior teams will battle it out at Hoërskool DF Malan for a place in the final on Saturday morning that will be followed by with the announcement of extended Proteas Netball squad.

The Proteas squad to be announced on Saturday is to increase the pool for coach Dorette Badenhorst and her assistant Dumisani Chauke as the senior national team will be busy in the coming two years.

The Proteas have the Quad Series in January against hosts England, New Zealand and Australia and there is also the Commonwealth Games next year and the 2023 World Cup where they have been challenged to finish in the medal positions.

In the semifinals on Friday, focus will be on hosts Cape Town against Nelson Mandela Bay and their captain Danelle Lochner is confident that they have what it takes to get to Saturday’s final.

“I don’t think there is pressure on us to get to the final because we are the host district,” said an upbeat Lochner.

“We are playing against Nelson Mandela Bay (NMB) who we had a tough loss against them earlier but I believe we can take them on and beat them. This has been a tough tournament for us, it was hard on the bodies with all the knocks that we have taken across the court. It is difficult playing indoor the whole year and then going outdoor for a couple of games.

“That situation has its challenges with things like dehydration but it has been a good tournament. There are lots of different players and various teams to make it exceptionally challenging.”

The talking point at this championship has been the absence of powerhouses Mangaung, Tshwane and Dr Kenneth Kaunda in the senior division.

“It’s a pity that they couldn’t be here and we don’t know what they would have brought into this tournament. We are focused on what is in front of us and not worried about those who are not here. It is an opportunity for other teams to do something different.”

The Spar National Women’s National Championships in Cape Town will start on Monday amid a sombre mood after a bus carrying two teams from the OR ...
Sport
5 months ago

Proteas Netball goalkeeper and defender Phumza Maweni wants to see more young players moving overseas to test themselves against some of the best ...
Sport
5 months ago
Next Article