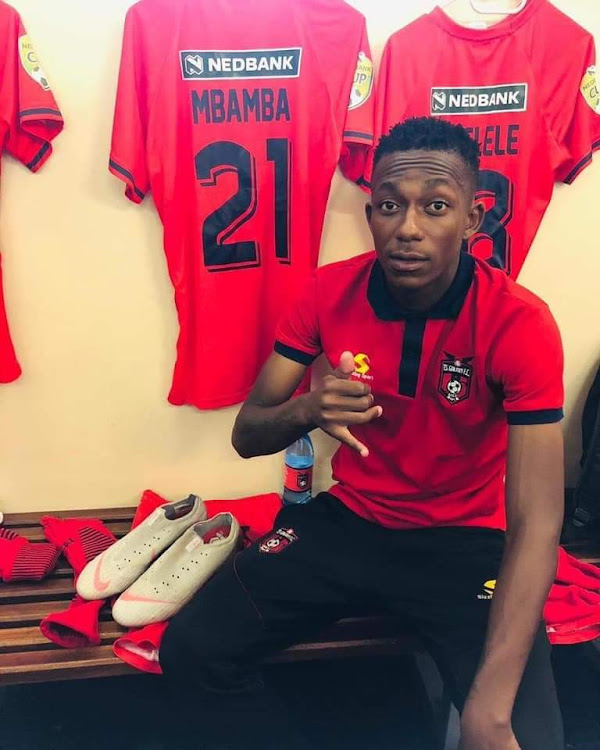 Barely a week after a monumental triumph, National First Division team TS Galaxy are in mourning, following the death of midfielder Thembinkosi  Mbamba on Saturday morning.

The team confirmed on twitter that Mbamba had died, immediately launching the South African sporting fraternity into grief, with the Premier Soccer League and Amazulu expressing their condolences on social media.

We are saddened by news of the passing of @TSGALAXYFC player, Thembinkosi Mbamba.

Heartfelt condolences to his family, club, friends and football fans in general. pic.twitter.com/CgK3t9FVlW

We're extremely saddened to learn of the passing of Thembinkosi Mbamba. Our thoughts and prayers are with @TSGALAXYFC and Mbamba's family. The whole nation mourns with you. pic.twitter.com/zrM0eWFBBC

The details of the 23 -year old's passing were not immediately available at the time of publication, however, reports are that Mbamba died in a car accident.

The Nedbank Cup champions, owned by Tim Sukazi and only 10 months old, pulled a herculean task, upsetting favourites Kaizer Chiefs 1-0 in Durban a week ago.

Mbamba's death, which comes a little over a month after that of Free State Stars' Sinethemba Jantjie, is the latest in a long list of local footballers who have perished at the wheel of car.

Over the years, players like Gift Leremi, Lesley Manyathela, Cecil Lolo, Richard Henyekane, the four Polokwane City players who passed away in 2012, as well as Mondli Cele have all lost their lives to traffic accidents.

Meanwhile, while Kaizer Chiefs midfielder Wiseman Meyiwa was fortunate enough to escape with his life following a horror crash in December, the 19-year old was rendered a paraplegic, and announced his retirement in January.

The same fate befell former SuperSport United winger Raymond Seopa in 2002, as did  Polokwane's Kopano Sekgobela, a survivor from the crash that killed four of his teammates.

Kaizer Chiefs will not be holding their end-of-season player awards for the second year running following a disastrous campaign where they failed to ...
Sport
2 years ago

A player exodus is looming at TS Galaxy and coach Dan ‘Dance’ Malesela admitted that he's powerless to stop approaches from top-flight clubs with ...
Sport
3 years ago
Next Article