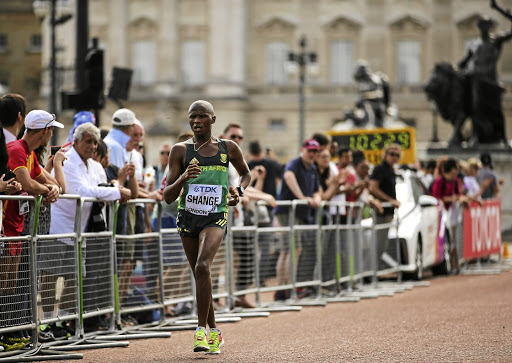 Will Lebogang Shange walk his way to the Olympics or not? There is confusion hanging over his inclusion in the SA Olympic squad after having tested positive for trenbolone two years ago.

Shange, who turns 31 on August 1, is part of the Olympic squad going to Tokyo, Japan, despite failing a doping test. In 2019, World Athletics (WA) – Athletics Integrity Unity – issued him with a notice of the allegation.

The SA walking race star received a four-year ban. The African Games walking race gold medalist told Sowetan that he is in Italy preparing for the Olympics but did not know if

he would join the SA Olympic team in Tokyo or travel from Italy.

Shange set a national record of 1:19:18 in the 20km race walk when he secured a fourth-place finish at the world championships in London in 2017.

Shange has gone underground and says he is working hard to clear his name. “I want to clear my name. Right now, I am in Italy. That is all I can say for now,” he said.

He said he has been in Italy for about a month but declined to comment further about his situation.

Athletics SA acting CEO Terrence Magogodela said the national federation had received a letter from the World Athletics June 22 regarding the athletes eligibility to compete at the Olympics.

“The World Athletics wrote to us regarding the matter. They wrote to us that he has until the cutoff date ( June 29) to qualify for the Olympics. As far as we are concerned, they gave him the green light to go to the Games,” said Magogodela.

“We will do a final check to confirm whether he can still compete or not. However, we want to state that we are aware of his issues. We will clear this confusion once and for all once we have contacted the world governing body‚ Magogodela told Sowetan yesterday.

SA Sports Confederation and Olympic Committee acting CEO Ravi Govender said it is the mandate of the federation to qualify the athletes. “We do due diligence on all the athletes before we can confirm them on the team. We did all the checks on all athletes that are going to the Olympics,” he said.

Race-walker Lebogang Shange‚ who is provisionally suspended for a doping violation‚ was on Tuesday included in the SA Olympic team.
Sport
2 months ago

South Africa’s speedsters have achieved an Olympic first by filling all nine spots available to them across the three men’s sprints for the Tokyo ...
Sport
2 months ago

SA race-walking star Lebogang Shange has failed a doping test for a steroid‚ the Athletics Integrity Unit has announced.
Sport
1 year ago
Next Article