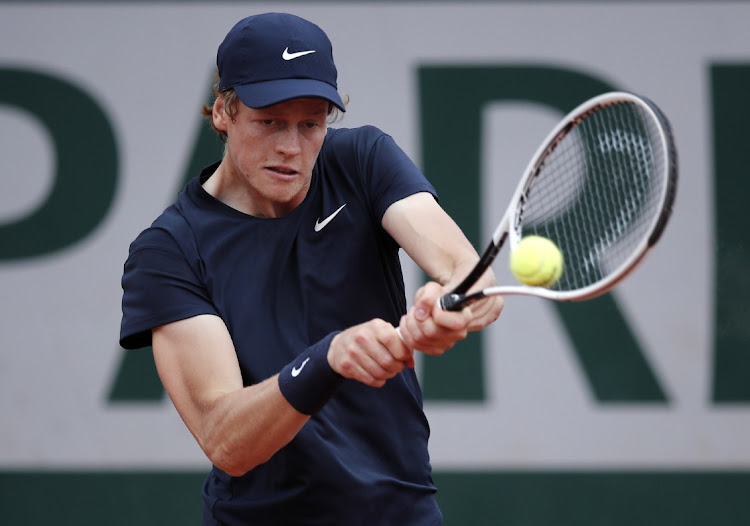 Italy's Jannik Sinner,19, and two of his countrymen are determined to upset the Grand Slams status quo.
Image: BENOIT TESSIER

Rafael Nadal, Novak Djokovic and Roger Federer have left their rivals just a few crumbs over the years, but a trio of hungry Italians will be eager to hunt them down in the fourth round of the French Open on Monday.

The 19-year-old Jannik Sinner, tipped as the next big thing in tennis, fellow teenager Lorenzo Musetti, whose stunning behind-the-back volley has been hailed as the 'shot of the tournament', and 2019 US Open semi-finalist Matteo Berrettini all advanced with impressive performances on Saturday.

Musetti did not shy away from making a blunt assessment about the success the Italians have enjoyed in Paris after beating compatriot Marco Cecchinato in five sets: "Me and Jannik, I think we are the future of Italian tennis, and of tennis in general."

That is some prediction coming from a 19-year-old tyro who is making his Grand Slam debut this week.

For the first time since tennis turned professional in 1968, three Italian men are in the last 16 of a major and they will face the creme de la creme of men's tennis -- Djokovic, Nadal and Federer -- who between them have amassed 15 of the last 16 Grand Slam titles and a combined haul of 58 majors.

"So it's a very bright future for Italian men's tennis.

No Italian man has won a Grand Slam since Adriano Panatta triumphed at Roland Garros in 1976 and if there is any chance that Sinner, Musetti or Berrettini will lift the Musketeers Cup this year, they will face their biggest obstacles in the next round when they take on the might of Nadal, Djokovic and Federer respectively.

The hard-hitting Sinner faced Nadal in the Roland Garros quarter-finals last year and although he lost in three sets, he served for the opening set and gave the Spaniard a run for his money.

Last month at the Rome Masters, the 19th-ranked Sinner was no pushover as he troubled the 13-time French Open champion before losing 7-5 6-4.

"I think it's a good test. I've played twice already against Rafa. But this time is going to be a little bit different."

Musetti, who became the sixth male player since 2000 to reach the fourth round on their Grand Slam debut, delighted the crowd on Court 7 with his single-handed backhand and effortless lobs, with Sinner conceding: "I think he's talented, very, very talented, and maybe more than me."

But Sinner, despite still being in his teens, already has experience.

"He is a bit ahead of me and I'm just living what he was living last year. We are growing together, playing together every week," said Musetti, the world number 76.

"I'm happy if Jannik is going well, but of course I have to see myself improve. I'm really proud and happy that Jannik is still going forward."

Aged 25, Berrettini already has a proven track record at the slams, having reached the fourth round or better in tennis's big four events.

On paper, he also appears to have the best chance of reaching the last eight considering Federer, who will turn 40 in August, was kept on court till almost 1am local time on Saturday as he struggled to get past unheralded German Dominik Koepfer in four tight sets.