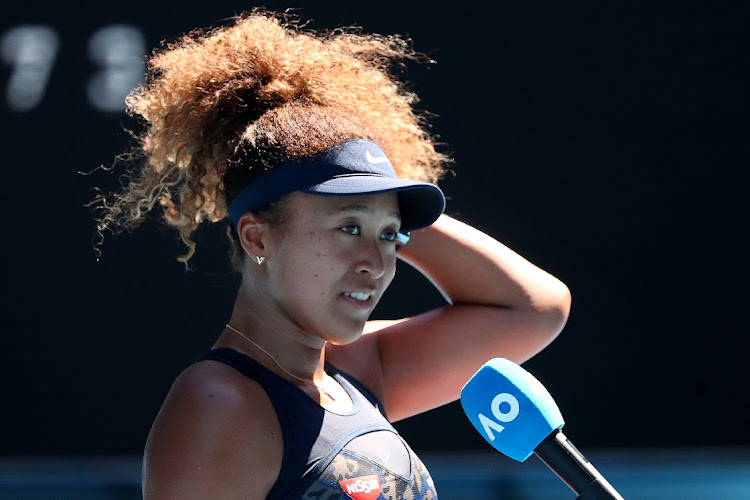 Naomi Osaka reveals she will not take questions from the press at the 2021 French Open because the nature of news conferences puts an undue burden on players’ mental health.
Image: KELLY DEFINA

This weekend was nothing short of being “dramatic” as we saw artists fighting for their voices to be heard either through seeking to be done right by the department of sports, arts and culture’s relief fund or an athlete wanting the world to understand her issues of mental health.

While being in the industry space has its perks, many social media users found themselves sympathizing with most of our greats as they are forced to live their lives according to the public’s standard despite their financial constraints.

"They don't know us, they only want to come to our funerals. They couldn't even give #Mjokes the covid-19 relieve fund."
Trompies Member Eugene Mthethwa ruffled feathers at #Mjokes' funeral. He staged a one man protest disrupting MEC Mbali Hlophe's speech. pic.twitter.com/NcAqlfjC7z

Over the weekend, SA saw Trompies group member, Eugene Mthethwa bring fellow group member Emmanuel “Mjokes” Matsane’s funeral to a standstill when he tried to stop the Gauteng MEC of Sport, Arts and Recreation in Gauteng Mbali Hlophe from speaking.

Mthethwa didn’t beat about the bush with his words to the MEC when he tried to expose the government for allegedly not taking care of South African artists.

In a video that went viral on Twitter, Eugene can be heard uttering the sentiments that the government only recognise  artists once they have passed, but couldn’t financially support them with a relief fund when they were alive.

Matsane passed away last week Sunday in a car accident. He was one of the five members of the legendary Kwaito group that gave us legendary hits in the late 90s and early 2000s. He was also the co-director at Kalawa Jazmee.

Highlighting the issues of mental health in athletes, four-time grand slam champion, Naomi Osaka, revealed she will not take questions from the press at the 2021 French Open.

In a statement she posted on her Twitter account, Osaka expressed that she “often felt that people have no regard for athletes’ mental health and this rings true whenever she sees a press conference or partake in one”.

Expecting players to answer questions after losses amounted to “kicking a person while they’re down”, Osaka added in her tweet that’s now been widely retweeted.

She said her decision was “nothing personal” against the tournament, but stressed that in future, tournaments should reconsider their approach when it comes to press conferences.

Terry Pheto made us forget that we're in the middle of a pandemic when she stepped out in this Thebe Magugu design.

The award-winning actress showed us she can still get the block hot when she rocked a colourful dress that she paired with statement black ankle boots.

Pushing nothing but high-fashion, Terry is definitely showing us how we can fabulously slay through a pandemic.

From tell-all interviews to stunning red carpet looks, this weekend was quite an eventful one.
S Mag
1 year ago

Mapule Ndhlovu shares how to stay mentally and physically fit

Consistency is key if you want to shed off unwanted weight.
S Mag
1 year ago

While a good pair of socks may seem like the perfect way to go, you’d be surprised at how this day is celebrated in some parts of the world. Here are ...
S Mag
2 years ago
Next Article