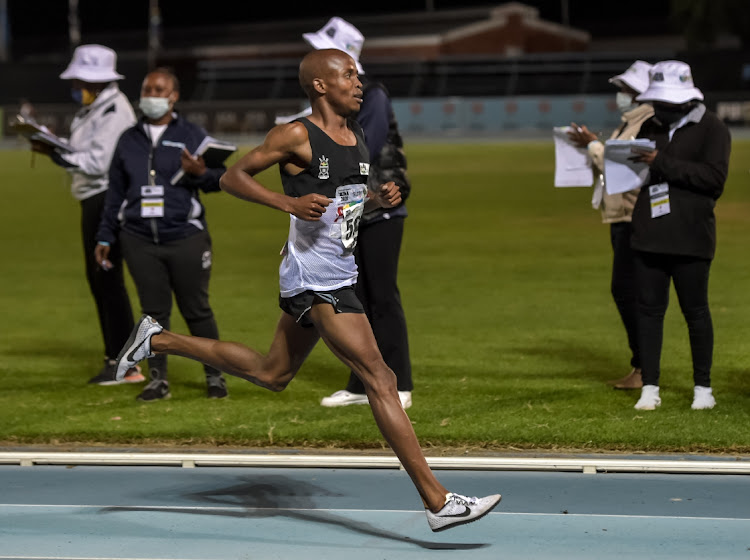 Mbuleli Mathanga has his eyes set on qualifying for the Tokyo Olympics via the 5000m in a special meet to be held in Durban tomorrow.
Image: Christiaan Kotze

In 2021 would be a bitter-sweet year for SA 10000m champion Mbuleli Mathanga should he fail to qualify for the Olympic Games in Tokyo, Japan, in July.

The KwaZulu-Natal-born runner will run the 5000m race at the Newton Classic Shootout event at the Kings Park Stadium tomorrow at 5pm. Athletics agent Lee-Roy Newton and Backtrack funds the event.

The SA men's 5000m Olympic qualifying time is 13:13:50 and that is what the soft-spoken Mathanga is aiming for at the home of the KZN athletics.

Mathanga, who is coached by Mdu Khumalo, is hoping that SA half-marathon and 5000m champion Precious Mashele will help him to run a faster time in his home province.

"The 13:13:50 time is doable. He needs a pacesetter who can push him until the 3000m mark and Mashele can do that. It is a difficult race and they will need to work together from the onset. We organised this race to try and help them qualify for the Games," Khumalo said.

Mathanga is optimistic that he can do well. He also emphasised the need for Mashele's help.

“I am counting on Mashele to push me to run the qualifying time; that guy is a machine. We have done everything in training and waiting to get onto the track to qualify. The plan is to run an Olympic qualifying time. I think Mashele will set the pace and I will follow him. I expect a fast race as the both of us are under pressure to try and meet the qualifying time," said Mathanga after his morning training session yesterday.

Multiple 800m women's Olympic Games champion and the poster girl of SA athletics, Caster Semenya, will run in the 5000m. In the race will be her training partner Glenrose Xaba who also hopes to qualify for the Games.

Semenya retained her national 5000m title at the SA Senior Athletics Championships in Pretoria when she stopped the clock at 15:52:28 last month.

However, the 30-year-old needs to up her game and run a qualifying time of 15:10:00 for the Olympics ticket.

Semenya, Moloi and Xaba still to qualify for Olympics
Sport
1 year ago

Wayde van Niekerk 'not seriously hurt' after pulling up in race

The word coming out of Wayde van Niekerk’s camp is that the Olympic 400m champion is not seriously hurt after pulling up in a sprint in the US on ...
Sport
1 year ago

If you had told the three-time Soweto Marathon champion Irvette van Zyl that she would break the 50km world record this year, she would not have ...
Sport
1 year ago