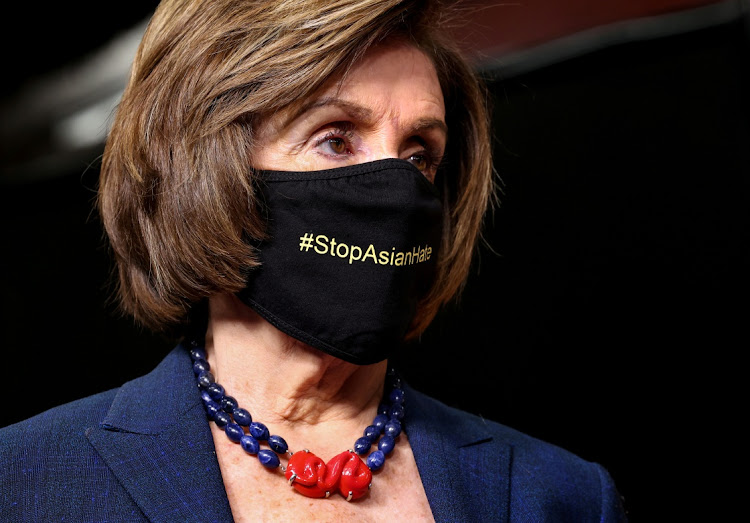 U.S. Speaker of the House Nancy Pelosi (D-CA) attends a news conference in the United States Capitol about the Covid-19 Hate Crimes Act, in Washington, U.S. on May 18, 2021.
Image: REUTERS/Evelyn Hockstein

U.S. House of Representatives Speaker Nancy Pelosi on Tuesday called for a U.S. diplomatic boycott of the 2022 Winter Olympics in Beijing, criticizing China for human rights abuses and saying global leaders who attend would lose their moral authority.

A Chinese foreign ministry spokesman said Pelosi's remarks were "full of lies" and that human rights were developing vigorously in China.

U.S. lawmakers have been increasingly vocal about an Olympic boycott or venue change, and have lashed out at American corporations, arguing their silence about what the State Department has deemed a genocide of Uyghurs and other ethnic minorities in China was abetting the Chinese government.

Pelosi, a Democrat, told a bipartisan congressional hearing on the issue that heads of state around the world should shun the Games, scheduled for February.

"What I propose - and join those who are proposing - is a diplomatic boycott," Pelosi said, in which "lead countries of the world withhold their attendance at the Olympics."

"Let's not honor the Chinese government by having heads of state go to China," she added.

"For heads of state to go to China in light of a genocide that is ongoing - while you're sitting there in your seat - really begs the question, what moral authority do you have to speak again about human rights any place in the world?" she said.

An independent United Nations panel said in 2018 it had received credible reports that at least 1 million Uyghurs and other Muslims had been held in camps in China's Xinjiang region. Beijing describes them as vocational training centers to stamp out extremism, and strongly rejects accusations of abuse and genocide.

In Washington, Chinese Embassy spokesman Liu Pengyu earlier told Reuters that U.S. attempts to interfere in China's domestic affairs over the Olympics were doomed to fail.

"I wonder what makes some U.S. politicians think they actually have the so-called moral authority? On human rights issues, they are in no position, either historically or currently, to make wanton groundless criticism against China," Liu said.

Over half of Japanese firms believe the Tokyo Olympic Games should be cancelled or postponed, a survey by think tank Tokyo Shoko Research showed on ...
Sport
1 year ago

Republican Congressman Chris Smith, who led the hearing, said corporate sponsors should be called to testify before Congress and be "held to account".

"Big business wants to make lots of money, and it doesn't seem to matter what cruelty - even genocide - that the host nation commits," Smith said.

Democratic Congressman Jim McGovern added the Games should be postponed to give the International Olympic Committee (IOC) time to "relocate to a country whose government is not committing atrocities."

"If we can postpone an Olympics by a year for a pandemic, we can surely postpone the Olympics for a year for a genocide," McGovern said, referring to the decision by Japan and the IOC to delay the 2020 Summer Games in Tokyo due to COVID-19.

Demands for some form of boycott of the Beijing Games are growing.

And a coalition of human rights activists on Tuesday called for athletes to boycott the Games and put pressure on the IOC.

U.S. President Joe Biden's administration has said it hopes to develop a joint approach with allies to participation in Beijing's Olympics, but Secretary of State Antony Blinken has repeatedly said the issue has not yet been broached in discussions.

Asked about Pelosi's comments, a senior U.S. administration official told Reuters the administration's position on the 2022 Olympics had not changed.

Biden, a Democrat, has said China is America's strategic competitor, and has vowed to not let the country surpass the United States as a world leader on his watch.

Proponents of Americans competing in Beijing's Olympics say it would be unfair to punish athletes, and the Games would provide a platform for the United States, which has one of the highest Winter Olympic medal counts, to show its vitality on the global stage.

Sarah Hirshland, the chief executive officer of the U.S. Olympic and Paralympic Committee, said in a written statement the committee was concerned about the "oppression of the Uyghur population," but barring U.S. athletes from the Games was "certainly not the answer."

"Past Olympic boycotts have failed to achieve political ends," she said.

The sprint sensation clocked in at 9.94 sec
Sport
1 year ago

Caster Semenya will make a bid for Olympic qualification in the 5‚000m in Durban on May 28‚ according to her SA-based manager Lee-Roy Newton.
Sport
1 year ago
Next Article