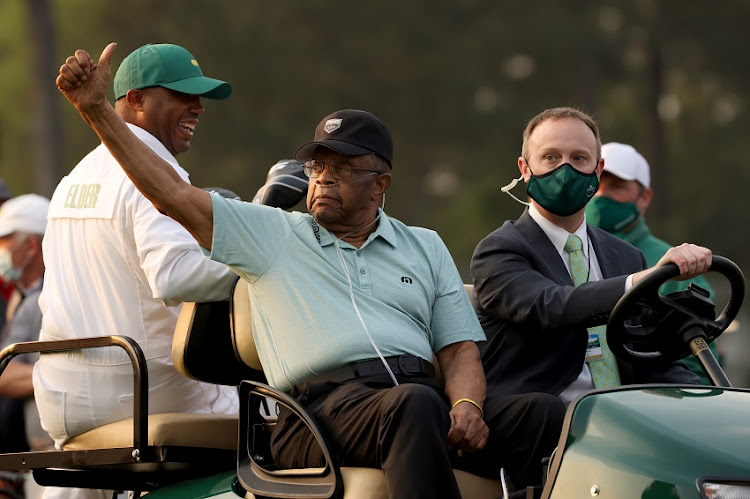 Honorary Starter Lee Elder of the United States waves to the crowd after the opening ceremony prior to the start of the first round of the Masters at Augusta National Golf Club on April 08, 2021 in Augusta, Georgia.
Image: Kevin C. Cox/Getty Images

A clearly moved Lee Elder was warmly welcomed at the Masters when he joined Jack Nicklaus and Gary Player as a new honorary starter for the 2021 tournament at Augusta National on Thursday.

A brilliant sun had barely risen over the clubhouse when 86-year-old Elder, the first Black man to compete in the Masters in 1975, was driven to the first tee in a golf cart as a new major season dawned.

"I think it was one of the most emotional experiences that I have ever witnessed or been involved in," Elder said.

"It is certainly something that I will cherish for the rest of my life because I have loved coming to Augusta National and playing here.

"My heart is very soft this morning, not heavy, soft, soft because of the wonderful things that I have encountered since arriving here on Monday."

Elder has limited mobility and did not hit a tee shot.

Shortly after Elder, nine-times major winner Gary Player, sprightly as ever at 85, emerged from the clubhouse and hugged Nicklaus's wife Barbara.

He then ventured to the tee with six-times Masters champion and 18-times major winner Nicklaus, who wore a yellow sweater to fend off a slight chill in the crisp morning air.

A gallery of several hundred people were on hand, smaller than usual due to the limited number of spectators allowed this year because of coronavirus concerns.

Elder rose gingerly from a chair in which he had been sitting and acknowledged the warm applause, before Ridley subsequently introduced three-times Masters winner Player, who split the first fairway with a superb drive that went a good 200 yards.

The South African, one of five players to complete the grand slam of winning all four modern majors, kicked out a leg in playful delight to celebrate his shot.

Nicklaus, 81 and not quite as nimble as Player, also hit the fairway, though his swing was not as fluid and his drive was some 40 yards shorter than Player's.

With that the 85th Masters was officially underway.

Player later recalled the story of the first time Elder visited South Africa in 1971 during the country's apartheid era of segregation.

Player said he had to make a personal request to then-Prime Minister John Vorster for Elder to come.

"It's quite sad to think that in those days ... I had to get permission for Lee Elder to come and play in our PGA. Quite sad," Player said.

"Lee Elder came down, and he was put under an enormous amount of pressure by people in this country, mainly Black people, understandably, and I was called a traitor.

"Here was a man that ... put a spoke in the wheel of segregation in South Africa."

As Elder and Player spoke, Americans Michael Thompson and Hudson Swafford led off the Masters in the first pairing at 8 a.m. local time (1200 GMT).

Defending champion Dustin Johnson was due out at 10.30 a.m.

There is a slight chance of rain on Thursday, with the risk of bad weather increasing on Friday and Saturday.