Bekele ruled out of London Marathon with calf injury 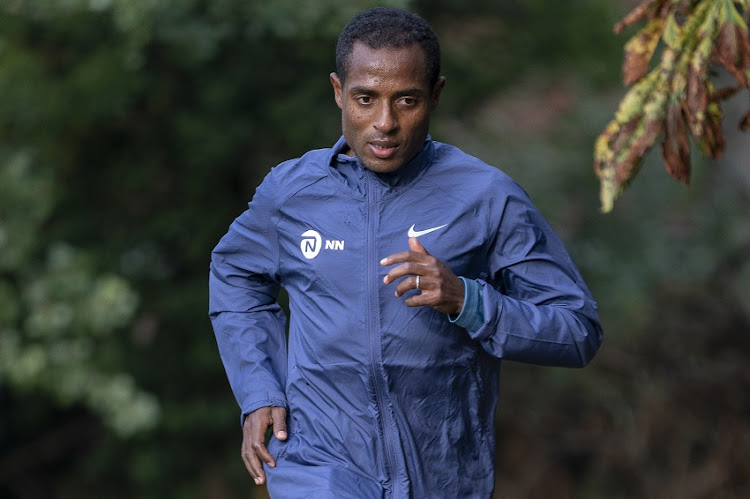 Kenenisa Bekele (ETH) trains within the grounds of the official hotel [location not disclosed] and biosecure bubble ahead of the historic elite-only 2020 Virgin Money London Marathon on Sunday 4 October. The 40th Race will take place on a closed-loop circuit around St James’s Park in central London.
Image: Bob Martin for London Marathon Events - Pool/Getty Images

Ethiopia's Kenenisa Bekele, the second-fastest marathon runner in history, has withdrawn from Sunday's London race with a calf injury which has put paid to his showdown with Kenya's world record holder Eliud Kipchoge.

Bekele said he picked up the injury after "two fast training sessions too close together", leaving Kipchoge as an even hotter favourite to win his fifth London Marathon title, with the race being run on a new, multi-lap course at St James's Park.

"I was in good shape but then I picked up a niggle in my left calf in the last weeks of preparation," Bekele said in a statement on Friday.

"I have been having treatment every day since then and I truly believed I would be ready but today it is worse and I now know I cannot race on it.

"This race was so important to me. My time in Berlin last year gave me great confidence and motivation and I was looking forward to showing that again."

Bekele's time of two hours one minute and 41 seconds in Berlin was two seconds shy of Kipchoge's world record set on the same course a year earlier.

"I know many people around the world have been looking forward to this race and I am sorry to disappoint my fans, the organisers and my fellow competitors." added Bekele.

"I will take time to recover and become fit again and I hope to be back in London next year."

Kipchoge ran 1:59.40 in an unofficial race in Vienna last October but, as COVID 19 wiped out much of the year's athletics programme, Sunday would have been both men's first race for a year.

Bekele's withdrawal is a huge blow to organisers and the BBC who are screening the men's, women's and wheelchair races live.

Race director Hugh Brasher has managed to organise an elite-only event on a fenced-off route, with the finish line on The Mall, the same as the normal course.

Wet, windy weather also means a world record attempt is unlikely, taking the edge off what will be the only major marathon to have been held since March.

"The world has been waiting to see this head-to-head but it will now not happen this Sunday. We know how disappointed he (Bekele) is and we wish him a speedy recovery," said Brasher.

"This was never likely to be just a two-man race as we had four of the top 10 fastest marathon runners ever and six men in the field who have broken 2:05, including (Ethiopians) Mosinet Geremew and Mule Wasihun, second and third last year, and 2018 runner-up Shura Kitata."