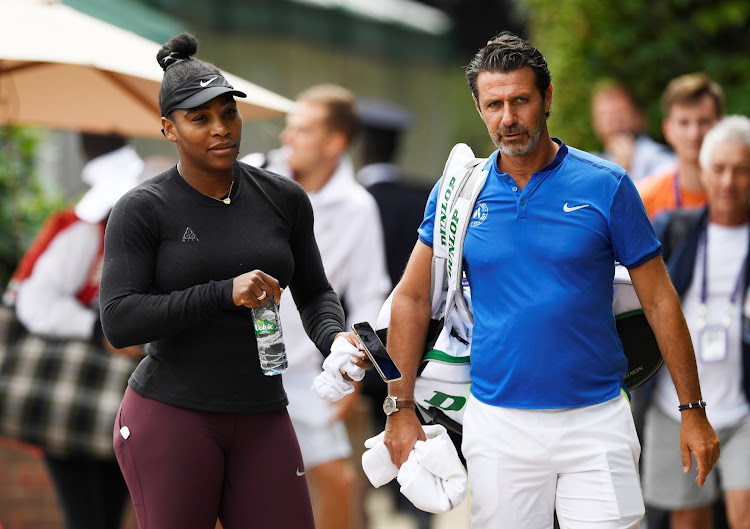 Serena Williams and her coach Patrick Mouratoglou during practice day at Wimbledon at the All England Lawn Tennis and Croquet Club in London, Britain on July 7, 2019.
Image: REUTERS/Tony O'Brien

Serena Williams' coach Patrick Mouratoglou says his tennis academy will host a five-week tournament starting in May that will give players the chance to get back on court during the Covid-19 pandemic.

The inaugural edition of the Ultimate Tennis Showdown (UTS) - which aims to fill the gap in the tennis calendar created by the health crisis - will take place without fans at the facility in the south of France, and be broadcast live, organisers said in a statement on Saturday.

The event will comply with local physical distancing requirements to ensure the safety of players, coaches and a limited number of UTS staff onsite, the statement added.

The tennis season was suspended in March due to the coronavirus outbreak, which has infected more than 2.26 million people globally causing over 154,000 deaths.

"The UTS is simply meant to be an alternative to what already exists," tournament co-founder Mouratoglou, who coaches 23-times Grand Slam singles champion Williams among others, said in the statement.

"It's a platform created to showcase the incredible talent, athleticism and personalities of the wide range of players.

"It offers a new and innovative approach, targeting a younger tennis audience and proposes a different way to distribute the money among the players."

The tournament will begin on May 16-17 and 10 matches will be held every weekend for five weeks, accounting for a total 50 matches throughout May and June.

Australian Alexei Popyrin will take on world number 10 David Goffin in the opening match. The full list of players will be announced shortly, the organisers said.

Fans will be able to listen to conversations between players and coaches and the code of conduct for players will be light to encourage them to express emotions more freely.

"Fans watching at home will feel closer than ever before to the stars of tennis through our engaging format," co-founder Alex Popyrin, the father of world number 103 Alexei, said.

"There's no doubt the UTS, with thrilling single matches and millions of US dollars in prize money, has the potential to be the world's most exciting tennis competition."