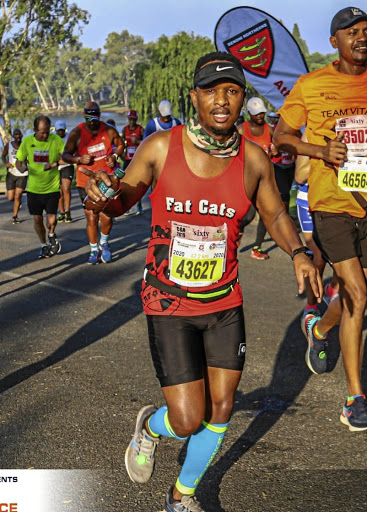 Harry Mathobela is disappointed after Two Oceans was halted. / Supplied

The cancellation of the Two Oceans Marathon has left many social runners in a stressful state, mainly because of the financial loss they suffered as a result.

One such person is Harry Mathobela, who was excited to run his maiden Two Oceans during the Easter weekend next month and make his debut at one of the biggest ultra-marathons in the world. Unfortunately, his dream remains just that - a dream that will not be fulfilled, at least not this Easter.

It will take another year of training for the social runner to realise his dream, due to the cancellation over coronavirus fears. It is the first time in 70 years that Two Oceans won't take place.

But what disappointed Mathobela the most was that the Two Oceans Marathon organisers are not planning to refund the runners who have paid for entries.

The Fat Cats athletics club runner is going to lose close to R3,000 he spent, which includes flight bookings.

He had booked a Kulula flight to Cape Town for R2,486.11 and paid R575 for his Ultra entry. For accommodation he had arranged to stay with Cape-based friends.

"I trained hard for this marathon and I feel like all my training sessions are down the drain," he told Sowetan yesterday.

Sports minister Nathi Mthethwa has slammed Tuesday’s statement by the Comrades Marathon Association (CMA) - in which they declared that the marathon ...
News
2 years ago

Comrades sets date for decision on 2020 down run

The Comrades Marathon Association will wait until April 17 to make a final decision on the 95th running of the world’s biggest ultra-marathon.
Sport
2 years ago

"It's like I wasted my time and it was going to be my first time visiting Cape Town and I was so excited going there to run and to explore the Mother City, but that dream has ended in a sad manner for me.

"I feel that my hard-earned money has been wasted because I'm not sure if I will get my money from the airline [Kulula], but will contact them to find out how their refund procedure works."

The race organisers sold 11,000 entries for the 56km ultra-marathon at a cost of R575 each, while for 21km - the most popular race in the event - it sold 16,000 entries at R550 each. For the ultra, they made over R6m, and nearly R9m for the half marathon. This is all the money they are not going to refund the runners.

One of the clauses for the Two Oceans states: "All entry fees are non-refundable. including, but not limited to, cancellation of the event or. change in the date, nature or format of the event.

"The event may be cancelled or changed due to severe weather or any other factors that may be deemed to threaten the safety of athletes, staff or volunteers."