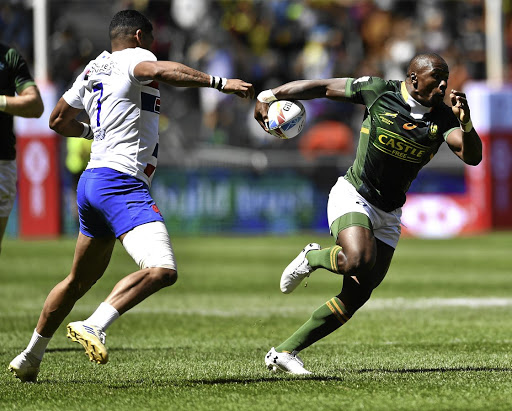 SA skipper Siviwe Soyizwapi, seen here in action in the Sevens Series, related how he made it through adversity to reach the sporting heights at the Under Armour summit in Cape Town. / Ashley Vlotman/Gallo Images

Siviwe Soyizwapi would have watched with angst as the SA Sevens team succumbed to Fiji yesterday, to lose the Sydney final of the World Sevens Series.

Soyizwapi has been out injured for the past four weeks, otherwise he would have been in Sydney captaining a team he's been a member of for the last four years.

The man who was last year named SA Sevens' Player of the Year, hopes to be back soon and, more importantly, in time for the 2020 Tokyo Olympics, where Sevens rugby will feature for the second time after making an appearance at Rio de Janeiro 2016.

The Blitzbokke, as the SA team are nicknamed, finished third in Brazil, bagging bronze, but Soyizwapi hopes his team can improve in Japan this July.

"Our goal is always to succeed and if we stick to the system, the process will take care of everything. I can't really say what went wrong in Rio, but we obviously want to do better," Soyizwapi said.

His teammates had already jetted off to Sydney, where they lost narrowly, 12-10, to the Fijians yesterday.

The Lions crashed to a 38-8 defeat in their Super Rugby opener against the Jaguares in Buenos Aires on Sunday morning.
Sport
1 year ago

Injury to captain Siya Kolisi and hooker Bongi Mbonambi removed the gloss from an impressive start to the Stormers’ Super Rugby campaign on Saturday.
Sport
1 year ago

Soyizwapi had bemoaned the fact that the Blitzbokke had allowed their standard to drop in the previous series in Hamilton. He hopes to return to action in time for the Los Angeles leg of the series at the end of this month.

Soyizwapi was speaking on the sidelines of the Under Armour annual technical summit in Cape Town, which he attended as one of the American sports company's ambassadors.

Launching their latest garments and a new slogan, "The Only Way is Through", the apparel maker had some of its athletes, including Olympic multi-medal winner Michael Phelps, SA paralympian Brandon Beack and Soyizwapi relating their stories on to how they made it through adversity to reach the sporting heights.

While Phelps's story of how, prior to setting the record by amassing eight medals at Beijing 2004 was captivating, Soyizwapi also told of how, in his early years, he had to endure months of unpaid work as a junior professional in the Eastern Cape.

"If you have a career in sport, you've faced many things, but you go through them," the 27-year-old told the audience. "I've had to go through training sessions with the expectation of playing, but sat on the bench and asked myself why this happened to me. I've gone through months of not being paid a hard-earned salary, unfairly facing consequences of reckless choices made by others. But you begin to fathom that there's no other way - the only way is through."