Soweto marathon off to racing start 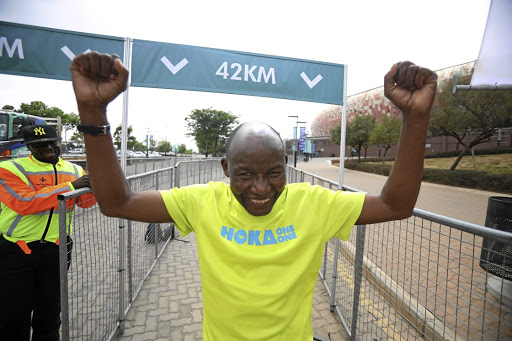 Thulani Sibisi, founding member of the Soweto Marathon, has urged more runners to compete in the 42.2km marathon to increase its appeal. /ANTONIO MUCHAVE

A founding member of the Soweto Marathon has urged more runners to compete in the 42.2km marathon to increase the appeal of the race.

The marathon has attracted 40,000 runners from across the globe and has three categories in which runners will participate in on Sunday.

Thulani Sibisi, 66, who spoke to Sowetan yesterday, just three days before the marathon, said he was impressed with the high number of participants, but said only a fraction would be taking part in the 42.2km race.

He said he was proud that the marathon had grown since its first instalment in 1991, but believes that it can grow bigger.

"In 1991, we had 500 participants and the race took place at Orlando Stadium. We were sponsored by M-Net but we didn't get a sponsor in 1992. Old Mutual came on board in 1993 and they helped us greatly in growing the marathon," he said.

Dozens of participants gathered at the FNB Stadium yesterday to collect their running packs ahead of Sunday's race.

Sibusiso Ngema, 34, told Sowetan he was excited about taking part in the 21.1km race for the third time.

The Comrades Marathon Association has closed entries for the 2020 ultra-marathon after reaching the South African cap of 25‚000‚ just three days ...
Sport
1 year ago

He said he had been preparing for it since February and hopes he will improve his finishing time.

"I ran over the past two years and I improved from the first time in 2017. I want to make sure that I improve on my time from last year. That's the challenge I have set for myself because I will also be running with some of my friends. I want to outrun them because they beat me last year."

Another road running enthusiast said she was nervous about taking part because her preparations did not go according to plan. Lerato Tshipe, 28, said her preparations were blighted by distractions.

"I changed jobs and had to move from Johannesburg to Midrand. So, settling in was a bit tough because it was a new environment and I had to get used to a new running route," Tshipe said.

She said this was her second time partaking in the event and that she entered the 21.1km race.

"Last year I ran the 10km race and thought I should up the ante because I felt comfortable and that I could do well in the 21.1km. But now I am not so sure. I will see how it goes," she said.

The marathon's effect is felt all over Soweto as the township comes to a standstill for a couple of hours as residents stand on the side of the roads and cheer participants on.

Innocent Kwinda, who lives on Vilakazi Street in Orlando West, said he and his family usually wait on the side of the road as early as 6am to catch the first group of runners as they pass their house.

"We cheer them on and we support them. We usually have a hosepipe so that we can offer runners water. Some of them just want to pour water on their bodies to help their bodies cool down."