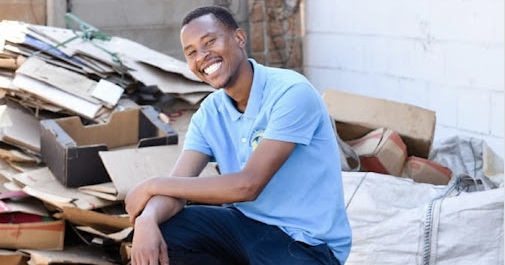 Smanga Mthembu owns a recycling business that is on the rise, employing six people.
Image: Supplied

Entrepreneur Smanga Mthembu went from being unemployed to hiring six people in his recycling business.

The Soweto entrepreneur and his business Umphakathi Recyclers were recently named as recycling champions by PET Recycling Company NPC.

His recycling business not only collects recyclable materials from customers but also gives them an option to sign up to a burial scheme.

“My business came about in 2013 [but officially registered in 2015] when I had to drop out of university. I stayed at home unemployed and I started paying attention to people who collect rubbish to go and recycle it. I did my research and realised I could also join in,” said Mthembu.

The 30-year-old said he now has more than 100 people bringing material such as paper, glass, plastic and boxes to recycle at his picking point which is based in White City in the township.

“This started with just me and now there are six of us. Our centre is at an old unused school and we use the yard as a pick-up centre,” he said.

“First we only had people in Soweto bringing us their recycling materials but now it's spread to the rest of Johannesburg.”

In his line of work, Mthembu comes across destitute people who turn to recycling to buy food or even scrape up money to be able to bury their loved ones.

“One day this lady came to me with about one ton of paper to recycle and she said she desperately needed the money in order to bury her son.

"I was incredibly disturbed by her story because she started crying uncontrollably when we gave her R4,500 for the paper. She said she would be able to do something with the money,” he said.

This prompted him to start buying equipment to launch his burial scheme.

“Our company is made up of two components. You can sell us your recyclables or we can use the money you make from the recyclables to pay into a accumulative burial scheme that will help in burying your loved ones,” he said.

The young entrepreneur said he had to drop out of university because his family could no longer afford to pay his fees.

“I had to drop out of university because my dad was retrenched after the company he worked at became liquidated.  So I ended up being like other young South Africans who had to stay at home without working,” he said.

Mthembu said when he paid his first salary he felt that his life was finally coming together.

“It did not hit me that I am an employer until I paid my first salary to employees who had also been struggling. What I am doing is not only creating employment but also creating opportunities for people in my community,” he said.

Mthembu said he is ecstatic about winning a Petco award.

The winners of the award will also be captured in an online documentary series hosted by actress Lindiwe Dim and directed by filmmaker Louw Venter.

Southern Basadi Multipurpose Cooperative can make one pair of shoes from 20 IV bags.
SebenzaLIVE
2 months ago

Here's how to turn plastic waste into profit

If you want to make money from waste and need expert advice or to connect with other waste collectors.
SebenzaLIVE
6 months ago

From waste to wealth: Mazibuko’s journey to success

People are making money from collecting waste, which is one of government’s focus areas for job creation, economic growth and protecting the ...
SebenzaLIVE
8 months ago
Next Article