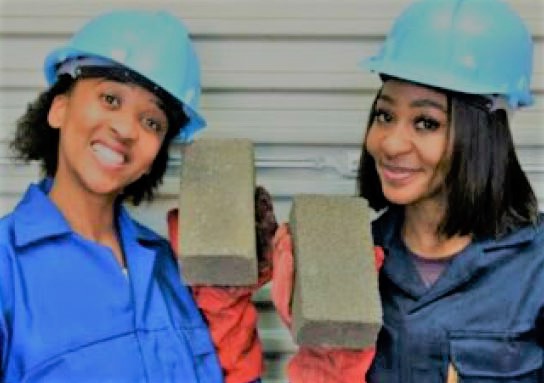 Sisters Kedibone and Kekeletso Tsiloane are making bricks, with plastic as a key ingredient.
Image: Supplied.

Sisters Kedibone (32) and Kekeletso (28) Tsiloane are providing a sustainable solution to waste pollution by using plastic to manufacture bricks.

The sisters, who are from Sasolburg in the Free State, are joint CEOs of Ramtsilo Manufacturing and Construction, which they established in 2013.

According to Kedibone, the bricks are made from 30% recycled plastics. They last longer than conventional bricks, as the plastic acts as a binding force and less water enters the brick. This also limits cracks and increases a building’s lifespan.

“They weigh about 2kg and have a 2% moisture absorption rate. They are manufactured in such a way that plastic will never leak into the environment, even after a building is demolished,” says Kedibone.

“They are also very effective in resisting fires and help to save electricity, as they retain heat in winter and stay cool in summer,” she adds.

No water or cement is used during the manufacturing process.

The bricks are moulded and left to cure until they have reached the required strength.

Kedibone says the bricks are approved by the National Home Builders Registration Council.

Making recycled bricks assists with limiting plastic pollution, as the plastic does not end up as waste.

“We collect plastic from waste pickers, packaging corporates and waste management companies. All the plastic waste is stored and processed on our site, ensuring that none of it ends up in waste streams, such as landfills, or our rivers and drainage systems,” Kedibone explains.

The company, which has already created eight permanent jobs in the recycling and construction industries, also makes cement pavers and builds houses, and the bricks have been used in low-cost housing.

The bricks can be bought directly from Ramtsilo Manufacturing and Construction or at certain Builders Warehouse stores in Gauteng.

When Phuti Kabasa (36) decided to add flavour to the mopani worms she was selling, she found a recipe for business success.
SebenzaLIVE
4 weeks ago

University of Pretoria (UP) student Rostum Ogbuehi has released a rap song encouraging people to vaccinate against Covid-19 and save their lives.
SebenzaLIVE
1 month ago
Next Article